They have always been religious, they have always been rich, and I am welcome there. They don’t need anything from me, I don’t need anything from them. It’s Shabbos many months into coronavirus lockdown and because the dozen or so synagogues within a 15 minutes’ walk are closed, prayers are happening on my parents’ street – average age 60. Someone spoke to the non-Jewish neighbour to explain what was happening.

Because of the concentration of Jews in Hendon, there are five to ten ‘comfortable’ cul-de-sacs just like this. The minyan needs ten men to exist. There are no women present – not that females aren’t welcome you understand, they just don’t need to attend. Among the group, however, everyone was known by ‘Mister Lastname’, as each man represented a household. This was a homosocial affair. It exists out of a sense of obligation for the neighbor in mourning, but it also exists because what would have been a two-minute walk is there on the doorstep. Among my earnest Jewish friends in progressive movements who choose a Jewish connection, services are on Zoom. But if you choose to live in Hendon, religion chooses you.

To distinguish how they have always been religious and how they have always been rich we just need to look at the casual nature of the prayers and the costume. You can normally judge someone in another social class based on material possessions, how we perceive their tastes to be either vulgar or elegant. For example, you might normally judge what car the neighbour drives, but not here. We were doing services between the kids’ hatchbacks. Costume is another indicator of social distinction but here – a white shirt with a shaved open neck, worn rubber soled black slippers, and a Barbour – is in line with the wider Hendon area, and makes grooming choices from the media seem unimportant. Dadbods are indicative of a comfortable decline into a levelling old age.

The same rules of material distinction are applied to Jewish culture in the form of religious practice in the ‘have always been’ tradition. That the residents have always been religious can be seen in the way services run. They went to a Jewish school and had a Jewish education. Four members of the minyan could layn from the Torah without preparation, and they knew, off Book, when the reader had made an error – even while chatting. And they could chat with the joshing ease of schoolboys.

The service even sounded like the community ‘have always been’ religious by the way the prayers sounded worn and sewn into everyday life. Shema, when the scroll was brought out of one man’s house, was sung in a kosher weekday Phrygian mode rather than the bolder major scale (which would have slowed the pace), and the result was a swift and casual ‘early minyan’ of the Beit Midrash, a synagogue library, normally held because congregants want a shluf before lunch and have to eat between services. It was humble and laid-back.

The halacha was known, no clergy were needed, the New Moon announcement caused a minor interesting classification dispute among people who reminded each other of the law (‘12.26am makes the Molad Monday? No?’ and to reassure, his neighbor, ‘It has always been one of those difficult cases’), and the boundary laws of eruv cited so that an infirm man could join from his doorway. If you are a man and live here – you are welcome.

As for distinguishing age status, I’m a 33-year-old unmarried academic and son of the residents, so when I’m called up to the Torah I’m called ‘bocchur’. The neighbor – a computer programmer – says he really likes my peak-less beanie cap (it was from Wish) that served as a hip, cross-cultural head covering. ‘It’s so cool!’ Was it a frum yarmulke from the mythical heim? a muslim taqiyah? a smoker’s cap? or a builder’s rollup? The friendly neighbour was only sixty, he enjoyed the playful millennial postmodernism and vowed to get one for himself. He won’t. ‘I really will’. He won’t.

The stakes of their material possessions as social indicators are low so he could afford to wear the cap to feel younger but doesn’t need to, and even though there is eyewatering wealth here, I feel accepted, a son of one of the filials. No one needs anything other than the presence of the male other. Conversation is made as everyday as the universal service.

The trestle table for the Torah scroll was wholesale, generic, the assortment of folded chairs were bland, ageless, and there was a subconscious effort in that generic form. Every house had a different siddur. But there is one noticeable distinction. They are more jocular with the new build resident.

There was a power cut last night, and the minyan was chatting with interest at the only house with lights on.

Everyone wonders about its power source, and ask frankly,

‘You have a generator?’

‘Maybe’ he shrugs, ‘If I do, it must have been automatically activated.’

Everyone sniggers but finds his lack of knowledge about his home’s infrastructure impressive with equal measure. Having an emergency generator represents freedom from power cuts. Having an emergency generator that was so automatic that you don’t know if it’s in-built represents a total independence. It promises of continuity whatever knocks the world throws at you; or perhaps not knowing whether you had one was taking the services of your area for granted.

If we think about it the generator becomes the religious services on the street at the time of pandemic. Some are privileged enough not to even know that they have a minyan built into their doorstep, and the choice for this cultural amenity is as subconscious as their choice in material possessions. It has always been there.

The service is continuing. To silence the mid prayer chat one house chants a phrase from Psalm 145 — ‘zokeif kafufim (who straightens the bent)’ — loudly and pointedly at the old gaggle, but with a smirk and a wink to me – the young co-conspirator with no social stakes.

The chide isn’t taken seriously by those nattering. The prayer service continues with the regular patter and when it ends, masculine wonder about the cost of a generator continues as if to ask whether you can have one in-built without knowing it. At least £70K for a small one, according to one property developer.

The man who liked my beanie had to programme generators as an early part of his career, so he knows from these things. ‘You would know if you had this one. It would have been very powerful. Did you see the lights on? It was as bright as Piccadilly Circus’.

To another resident, ‘Do we hear your generator?’

‘No, that noise is the air conditioning in the outhouse. My wife insisted.’

When the shuls are closed in Hendon, how is religious cultural life continued? This is how: Jewish culture is continued by the always religious, the always rich, the always male. Wealthy men through history have kept religion alive, and right now they’re keeping the practices for everyone else. It’s a total independence and continuity whatever knocks the world throws at you due to the less-than-conscious choices in where you choose to live.

And so, it is time for evening prayers. We hold our siddurim by the amber streetlamps, not that we need them, we know the prayers. There was another power cut, this time on the other side of the street. It’s even dark on the new build house. My conspirer approaches him with mischievous glee. ‘Nu? So where is your generator?’

The following week a big box arrived in the middle of davening. Instant catcalls of ‘is that your new generator?’ Response, ‘No it’s just four bottles of scotch.’

Clive Kennard
Clive Kennard is an Art Historian specialising in Anglo-Jewish history and material culture. He is currently completing a PhD about Simeon Solomon at the University of York
Categories: CovidReligion 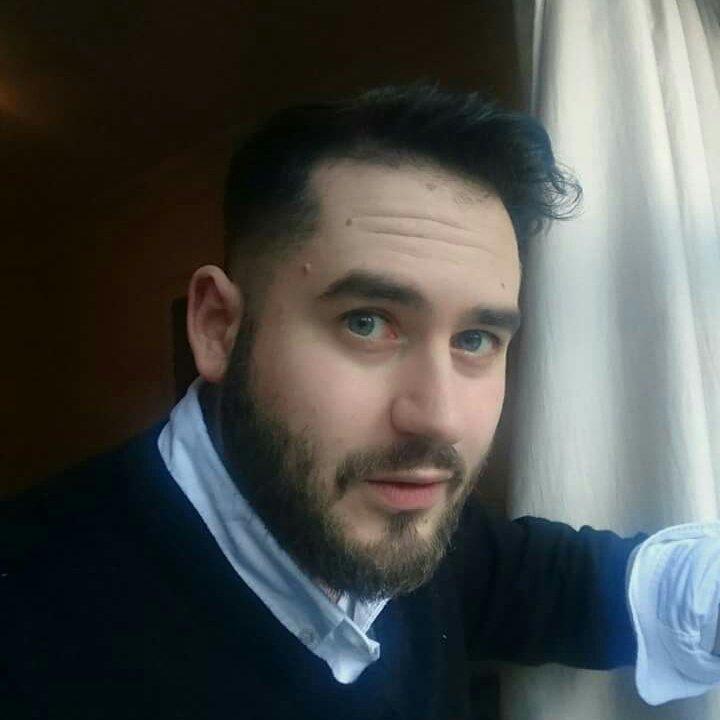 Clive Kennard
Clive Kennard is an Art Historian specialising in Anglo-Jewish history and material culture. He is currently completing a PhD about Simeon Solomon at the University of York