Locked Down Jews in Leicester

As the lockdown extends in Leicester, Lucy Michaels considers the pros and cons of being based in a small Jewish community during COVID-19.

Last Monday evening, as the UK government announced that Leicester would be going back into lockdown after a spike in COVID-19 cases, we were understandably heavy-hearted with the news.

As has been the case throughout the lockdown period, I have nevertheless felt supported and held by the Jewish community. Chabad of Leicester dropped off brownies and an invitation to a pre-Shabbat Zoom call, and later there were warm supportive words as our community joined Liberal Judaism’s nationwide Green Shabbat Zoom service.

I’ve lived in Leicester with my family for eight years, moving here from Israel for academic work. We found the transition from the Middle East to the East Midlands challenging but have come to appreciate our small community in this ethnically diverse city.

Founded in the mid-nineteenth century, the Orthodox Leicester Hebrew Congregation (LHC) is based centrally in the elegant Grade-2 listed Highfields Street synagogue.  The community is supported by Chabad of Leicester, represented by Rabbi Shmuli Pink and his family, who warmly host Shabbat meals and festival celebrations, as well as a civic Chanukah lighting each year.

Founded in the mid-twentieth century, the Leicester Progressive Jewish Congregation (LPJC) is a cosy community-run affair, overseen by visiting liberal Rabbi Mark Solomon and supported by a host of engaged members. It is located in the trendy Clarendon Park neighbourhood.

Perhaps because there are so few of us, many Jewish Leicesterites (though certainly not all!) move between the two communities in search of Yiddishkeit. In addition, there are several hundred Jews, unaffiliated to either community, on mailing lists who attend occasional events or the weekly lunch club for the elderly.

Leaders from both communities say that the lockdown has kept them busy in many new ways.  Because it is an ageing community, many members are shielding, making social isolation a key issue. There have also been several COVID-19 related deaths and other unrelated deaths during this period, including the much-loved Honorary President of LPJC, Dr Alex Keller.

The Pinks unexpectedly found all ten of their children at home, so have understandably had to focus on their family. The Rebbetzin noted that, in general, with synagogues closed, family and home have by necessity become the key focus for Jewish life. She also told me that this was the first time since arriving in Leicester in 2001 that they had not hosted Shabbat guests.

From a positive perspective, the Chabad Kosher Pantry saw a huge increase in demand from those unable to get to London for kosher provisions, and LPJC has had an increased number of enquiries from those interested in converting to Judaism.

Both communities have just completed major building work. LHC won heritage lottery funds for renovations, including a new mikveh and heritage centre, while LPJC built an annexe, inaugurated in December 2019. Neither community, however, seemed confident that the synagogues would be open for the High Holy Days this year, given social distancing requirements.

As someone who doesn’t fit the demographic of Leicester Jewry and who grew up in Golders Green’s bustling North West Reform Synagogue, I have struggled with some aspects of Jewish life here, such as the small numbers at services, few young families and the ‘distance’ from London.

Unexpectedly, COVID-19 has gone some way towards resolving these issues.

Both communities usually struggle to get a minyan, but the Zoom services have been very well attended. For example, Rabbi Mark combined services for his Leicester and Edinburgh Liberal communities, with 100+ regularly attending, including the elderly, housebound and those with young kids. Both communities felt that these pre-Shabbat or Shabbat online services had been vital in giving the week a structure during lockdown, where weeks all seemed to merge together.

The necessary recourse to Zoom has also given me extraordinary opportunities to access online study, prayer and Jewish life impossible previously: from joining Friday night services in Jerusalem to chavruta study and regular Havdalah check-ins with Extinction Rebellion Jews to a tour of the Jewish eco-farm in Kent and cooking along with a Jewish food festival in Boston.

Workshops and speaker events usually held in London that I could never have attended due to childcare and travel costs have now become webinars. I feel a great levelling to us all joining electronically, since I’m no longer the odd Jew from Leicester, joining remotely or sending apologies.

The lack of young families here, however, is a problem that cannot be solved by Zoom alone. Young Jewish families, especially Israelis, tend to come to Leicester as students or on short-term academic or work contracts, so rarely stay more than several years. The few families that are committed to being here permanently have varying levels of time and commitment to self-organise a cheder.  I have two kids under 10 and this period has made me yearn for more young Jewish families and a more organised Jewish education for my kids.

Similarly, the pandemic has also made my London-based family suddenly seem much farther away than an hour’s train ride.  At least one prominent Jewish community leader has decided, prompted by the pandemic, to leave Leicester to live closer to their family.

Community leaders, in general, seem positive that the community here will survive despite the challenges of COVID-19.

But from my perspective, despite the warmth of this community, the pandemic has clarified for me that my family’s future lies elsewhere.

Lucy Michaels
Lucy is an academic and NGO researcher currently based in Leicester. She knows lots of things about food, farming, water, energy and climate change, and has spent the past few months growing vegetables with her kids.
Categories: CovidReligion 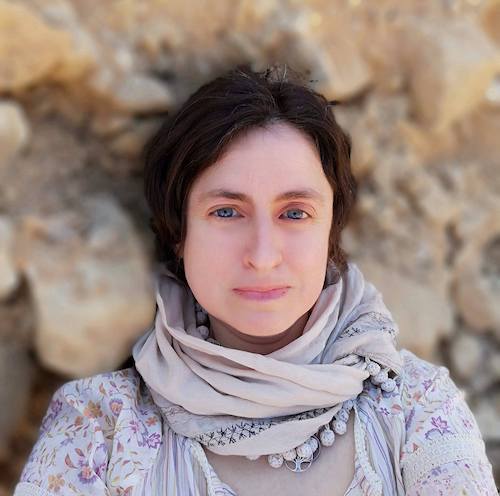 Lucy Michaels
Lucy is an academic and NGO researcher currently based in Leicester. She knows lots of things about food, farming, water, energy and climate change, and has spent the past few months growing vegetables with her kids.