A Letter from Portland

On the day I write this, we have witnessed 60 days of daily demonstrations in the streets of downtown Portland Oregon. After the murder of George Floyd by police, it was awe-inspiring to see myriads of thousands rise up across the US. Horrified by the blatant injustice, peaceful crowds in Portland Oregon, masked, observing safe physical distancing, marched to demand mercy and human decency under the message Black Lives Matter. Walking with those who marched across bridges and filled parks, I knew I was in the presence of something holy.

Something drew many of us to the Justice Center; perhaps its name. There I have seen young people, and some not so young, create meaningful community around a shared consciousness of urgency. Houseless people came together to create “RiotRibs”, feeding thousands of protesters, grilling all night. Pizza and hand sanitizer are shared, musical instruments accompanying the chants (and my shofar) are played, and signs naming too many dead at the hands of U.S. police, over 1000 in 2019, are raised. After two months, the sense of community is real and comforting, and the outrage is incandescent, and growing. The current numbers estimated to join the nightly gatherings downtown are now more than ten thousand.

The spreading sense of “enough is, finally, enough” has to do with the fact that long before the current administration of the U.S. government sent troops to assault Portlanders with tear gas, flash bang devices, LRAD sound weapons, and “less lethal” munitions in order to “to assist with the protection of Federal monuments, memorials, statues, or property,” the very same type of military weapons were already being used by the Portland police.

The police violence regularly wreaked upon our fellow Portland residents is shocking, unjustifiable under any circumstances. And it is an ongoing problem. In December of 2012, the US Department of Justice filed a lawsuit under the Violent Crime Control and Law Enforcement Act of 1994 against the City of Portland based on the conduct of the Portland Police Bureau, because the police were the ones committing the violent crimes.

We in Portland Oregon are not unique in this, but Portland is well suited to serve as both a microcosm and a flashpoint because of Oregon’s uniquely racist, overwhelmingly white history. The state was created as a “racist utopia” which enacted a series of exclusionary laws in its founding. And as we might expect, the racism that discriminated against our Black neighbors blocked Jews from full belonging as well; when a new road system destroyed Black neighborhoods, the old Jewish quarter downtown was also eradicated. It’s no surprise to us, if we’ve been paying attention, that the Portland police are a case study in the upholding of white supremacy “values.” That this extends to impunity to murder is a sickening but logical outcome.

Confronted with this evil, how can a Jew do anything other than protest? Yet we see the Jewish response split between what we might call the “court Jew” response and the Torah response.

The “court Jew” response arises from the generationally traumatized, fearful stance of those whose safety was very recently gained, and is none too secure. This is understandable, but has never been a basis for ethical action. As our ancestors, who lived through that trauma, insisted, our response, whatever the consequences to ourselves, must be the Torah response. Otherwise, as Yeshayahu Leibowitz put it so well, we are worshipping nothing but ourselves.

The Torah response is, as the Prophet Isaiah has been reminding us in clarion tones for the past Three Weeks, is to pursue justice for the vulnerable, and not to stop until, like a flash flood, righteous judgment destroys every evil institution in its path.

As a Jew, I know how to act: justice, justice shall you pursue, that you may live (Deut.16.20). I’ve been schooled by brilliant, dedicated Black activists. Teressa Raiford of Don’t Shoot Portland and Commissioner Jo Ann Hardesty, the first Black woman to serve in Portland’s City Council, are only two of the powerful Black voices that I seek to center and amplify. As a white person, I am not even aware of the ways in which I float in a sea of white privilege at all times; as a Jew, I’m fully aware that I may drown.

Yet this is no time for measured action. State violence is clear and our answer must be as clear and strong as the alarm call of the shofar. For those Jews who hesitate, pointing out Black anti-Semitism, I challenge you to see that this is a response of selfish fear, not of logic nor empathy. Even if you do regard an anti-Semitic Black person as your enemy, you must nevertheless aid them in raising their life.

When you see the ass of your enemy lying under its burden and would refrain from raising it, you must nevertheless raise it. (Ex. 23.5)

The blood of our Black siblings cries out to us from the ground. With my Portland Interfaith Clergy Resistance I’ve been witnessing at protests with Lenny Duncan, a Black activist pastor:

The long struggle of Black liberation for 400 years has been the canary in the coal mine in the U.S.’s often fickle relationship with its own soul. Our blood has washed the streets of America from Crispus Atticus, Sandra Bland, now George Floyd. Our blood, our pain, our cries, often ignored by the global community as the petulant cries of a privileged minority in the world’s greatest superpower, are the very screams of liberation that echo across a humanity capable of a torn down Berlin Wall and where freedom has found home in Soweto. (Rev Lenny Duncan)

The streets echo with prophecy from Portland Oregon. The Black voices warn that unless their lives matter, no lives matter: the canary sings its warning in housing, in finance, in coronavirus testing. Despite state violence determined to silence us, we will not be silent until justice is done. 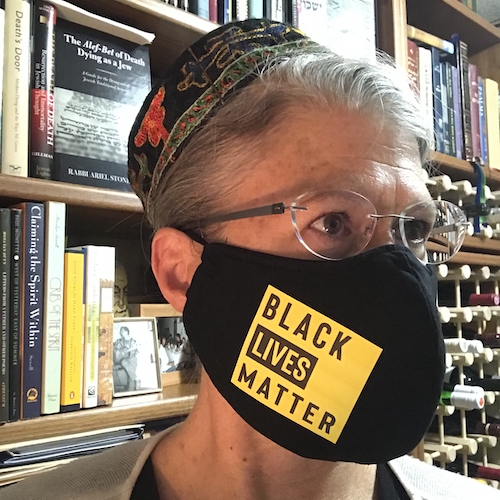