The Water and the Wine

Below is the preface to Tamar Hodes’ novel The Water and the Wine. The novel follows the early lives of Leonard Cohen, Marianne, and  other writers and artists who took up residence on Hydra, Greece, in the 1960s.

In April 1965, my parents took my brother and me to live on the Greek island of Hydra, as there was an artistic community there. It was known about: the photographer James Burke completed a feature on it for Life magazine in 1960. My father’s book on Martin Buber had been well-received and he was commissioned to write a book on the politics of the Middle East; he needed to live somewhere cheaply for a year. My mother could paint and he could write and they would be part of a group of like-minded people. My brother had a tutor and I had a nanny called Evgeniya.

Among the group were some interesting people, such as the American Norman Peterson who made sculptures from objets trouvés. He was so poor that the only way he could heat his home was to keep a felled tree in the main room and set the branches alight when needed. There were also the Australian novelists Charmian Clift and George Johnston who wrote when they weren’t fighting or drinking. Their three children witnessed some difficult scenes. As Max Brown puts it in Charmian and George: The Marriage of George Johnston and Charmian Clift, ‘the victims were the children.’ American writer Gordon Merrick and his partner, dancer and novelist Chuck Hulse, were able to live openly as gay men. But the most important resident was Leonard Cohen. He was in his early thirties at this time and just about to become well-known. Unlike the others who rented houses, he had actually bought his, with an inheritance from his grandmother. He was writing novels but also poetry, lyrics and music.

In the evenings, the artists would gather at the Douskos Taverna (still owned by the same family now) and, beneath the pine tree through which a wisteria released its sweet scent, they would drink retsina and discuss their work, ideas, philosophy and music by the light of the kerosene lamps. Leonard Cohen would strum his guitar and sing his songs.

The local Greek people were surprisingly tolerant of these bohemians for two reasons. Firstly, it was their nature to be easy going and also, economically, it did them much good. The artists employed them as maids, cleaners and odd job men. Old Baba Yannis would do any task as long as a few drachmas passed his palm and, even though he was in his eighties, he would haul logs across the island. Sponge-divers sold their wares and boatmen ferried passengers to and from Piraeus, the port of Athens. As there were no cars on the island (and still aren’t today) everyone travelled by donkey and ‘the mule boys’, as they were known, were paid to accompany the riders. The Katsikas brothers owned the local store, which supplied a surprisingly wide range of produce from fresh fruit and vegetables to candles and dried beans.

It was in this shop that Leonard Cohen first met Marianne Jensen. She was living on Hydra with her novelist husband Axel (they were both Norwegian) and their young son Axel Joachim, but the marriage was unhappy. Axel had other lovers and Marianne felt lonely and neglected.

The relationship between Leonard and Marianne was a very loving and passionate one, as they had much in common. Marianne was a muse to both her husband (she and Axel separated) and Leonard. Although at times she found the role of muse a privileged one, at other times she felt that she was invisible, unable to satisfy her own creativity. She did some drawing, writing and modelling but never really found her artistic identity. Doing this period, Cohen wrote many of the songs which would later become classics: Sisters of Mercy, Suzanne and Bird on a Wire. He was very good to Axel Joachim, too.

Growing up in north London, years later, my parents would often tell me about the time they spent on Hydra. As a writer, I had published a novel, Raffy’s Shapes, and a collection of short stories, The Watercress Wife; there were also stories in anthologies and on Radio 4, but I always thought that the period on Hydra would make a fascinating novel. There are many books documenting this time but a fictional version would allow a writer to go behind the facts and sit at the table with the characters, eavesdrop on their conversations and hopefully understand their desires. As E.L. Doctorow said, ‘The historian will tell you what happened. The novelist will tell you what it felt like.’ Fiction is a passport which allows one to slip into the lives of others. Leonard Cohen said in a 2005 interview with Kari Hesthamar for Norwegian radio that ‘…to write about Marianne and Hydra, it would take a novel…’

There were so many issues that interested me: how even in such a liberal society, the women and maids were still responsible for domesticity and the children; the way that the youngsters had freedom but were, in some people’s eyes, quite feral; the extraordinary tolerance among people practising Judaism, Christianity and Zen alongside the local Greek orthodox natives; whether freedom from work helps creativity; if focusing on your writing or painting is self-indulgent; whether being a muse is a blessing or a curse; and whether you can escape your demons on a Greek island. Charmian Clift thought not and wrote in Peel Me a Lotus: ‘On an island, eventually, you are bound to meet yourself.’ I was also very interested in the tension between excitement and risk versus stability, and whether children’s needs are different from those of adults.

For many years, I thought about Hydra and read extensively about it. Then several events happened which conspired in compelling me to write my novel. My father sadly passed away in 2013; he left me his journal about that time; my mother died the following year and left me a signed first edition of Cohen’s poetry collection Flowers for Hitler. Marianne died in 2016, four months before Cohen; it felt like a groundswell beneath me, pushing me to write my book.

It was a fascinating process, trying to plait fact, fiction and memory into a coherent whole. At times, I felt exhilarated by it; at other times, very upset by the exploration of the relationships which fell apart. Leonard Cohen admitted this in Kari Hesthamar’s 2005 book So Long Marianne: ‘Those relationships on Hydra were all doomed. We didn’t know it at the time, but they couldn’t withstand what life imposed on us…..None of those relationships survived, except in the sense that we honour them and we recognize the nourishment of those experiences.’ The island was both magical and tragical. Without giving away the plot of the novel, there was laughter on the island but there was also pain.

I also became very interested in islands, in the way that they seem to be an escape but actually they are places of confinement. You have to face reality, as there is nowhere to run. My husband and I love visiting Mediterranean islands and I really enjoyed describing Hydra – the birds, food, flowers and goats. It felt to me as if Hydra was a character in the novel with an identity of its own.

I was thinking about The Tempest when I wrote my novel. Prospero may feel that he has left behind his problems and his past, but actually it is on the island that he is forced to confront the truth as all his history is revealed. When he says to Caliban, ‘This thing of darkness I acknowledge mine’ he is eventually admitting that he was also partly to blame for what happened.

My main concern was how to represent my parents, whom I loved deeply, without being disloyal to them. My only option was to reinvent and fictionalise them as Jack and Frieda Silver. Some of the events actually happened; some did not. I asked my brother’s permission to reshape him into Gideon and I modelled the little girl on me and gave her my middle name, Esther. Many writers face this dilemma: do you have the right to tell your story when it is also the story of other people?

Luckily, I found a publisher, Hookline Books, who liked the novel and most of the reviews have been positive. The San Francisco Review of Books wrote: ‘Well-turned storylines, excellent character development, and a generous portion of the world as lived in the sixties make this a very fine treasure of a book. Recommended.’

Writing is a strange activity, full of paradoxes: it is solitary and yet it is a form of communication; it is deeply personal but can also be universal; it is specific and general; it is liberating and entrapping; it is joyful and upsetting; it can be comforting and unsettling, and it takes so much longer to write than it does to read!

Whether The Water and the Wine works as a novel, readers will have to decide for themselves.

Tamar Hodes
Tamar Hodes is a Jewish writer, Israeli-born, and living in the UK since childhood. Her short stories have appeared in Salt’s Best British Stories, A Treasury of Jewish Stories, Lilith, Manna and have broadcast on Radio 4. She has had two novels published, Raffy’s Shapes (Accent Press, 2006) and The Water and the Wine (Hookline Books, 2018).
Categories: Fiction 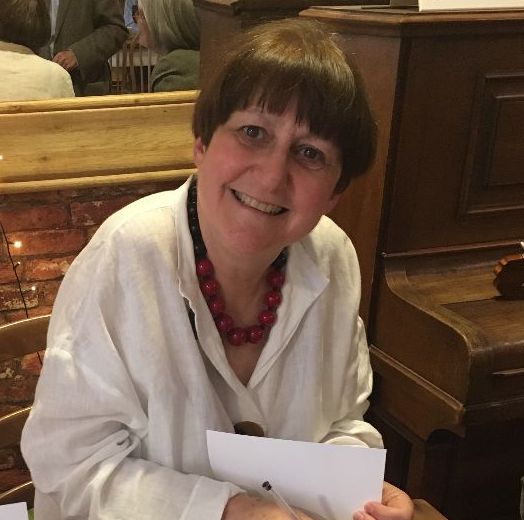 Tamar Hodes
Tamar Hodes is a Jewish writer, Israeli-born, and living in the UK since childhood. Her short stories have appeared in Salt’s Best British Stories, A Treasury of Jewish Stories, Lilith, Manna and have broadcast on Radio 4. She has had two novels published, Raffy’s Shapes (Accent Press, 2006) and The Water and the Wine (Hookline Books, 2018).