Looking like a Philip Roth Scholar; or, Looking Jewish in Scotland

Joshua Lander reflects on his Jewish looks and being a scholar of Philip Roth.

At my first ever conference I was told I looked like a Jew but didn’t sound like one. A few years later at the Vilnius Yiddish Institute, a classmate told me I had the look of a Philip Roth scholar, and when I attended the Philip Roth Remembered Conference in 2019 a fellow presenter informed me I looked a little like Roth himself. This last remark was especially disconcerting.

I know, and you probably do too, what a Jew supposedly looks like: Big nose, black curly hair, and a man. Plus, the unmentionables. I guess I fit the bill on that front, but I don’t look much like the stereotype Scot (whatever that means): My dad’s family are from Iraq and my mother’s – the Jewish side of the equation – are from Lithuania and Hungary. I’m pretty invisible in America and Canada; there, I’m white as white can get. But in Scotland, where whiteness is taken to a whole new level, the Scots can tell that this guy, with his suspiciously elongated nose and slightly olive skin, isn’t from here. ‘Where ye fae?’ I’m asked on occasion, and when I reply, Glasgow, they shake their heads and say, ‘Naw, where ye fae, originally?’

So, I look a little too Jewish to be Scottish, but apparently, I don’t sound like a Jew. Woody Allen and Roth have a lot to say about what a Jew sounds like, and by their (icky) standards I fit the bill: I’m self-deprecating, talk incessantly about how not Jewish I am, and frequently engage in spectacular shouting matches with my overly-involved mother. But I’m not American, so I don’t sound like their Jew. And besides, whoever heard of a Scottish Jew?

I don’t sound Scottish, either. I was born in London, Kew (bloody posh) and we moved up when I was three, so I have a neutral accent. I’ve had Americans think I’m American and Canadians think I’m Canadian, but Glaswegians hear me and think, Edinburgh. When I teach Scots poetry my Scots sounds performed, as though I were imitating a Scottish voice. Nobody has ever said I sound Jewish here, but that’s probably because Jews are almost silent in Scotland.

Nevertheless, I grew up surrounded by Jewish voices: I went to a Jewish primary school, recited Jewish prayers, went to Jewish buildings, and played with Jewish children. And then I went to secondary school in the West end, where I was one of two Jews. My grandparents died, so we stopped saying Jewish prayers and going to Jewish buildings, and I eventually made new, non-Jewish friends.

When I went to Aberdeen University, I was called Shylock; I’d never studied The Merchant of Venice so this dig went whooshing over my head. When the intoxicated Geordie lad lifted his top and begged me not to take a pound of his flesh I was, of course, very confused, but I laughed along. I didn’t want to look stupid…

Thanks to Dr Jane Goldman, my Virginia Woolf lecturer in my master’s year, I discovered Jewish American literature. After hearing me chat about my Jewish heritage she told me to go away and read Michael Gold’s Jews Without Money; Jews were writing Jewishness, who the hell woulda thought it?

And then I found Philip Roth: the dirty old Jew. The lechery, the obscenity, the rage, Roth captivated me in a way no author had ever done. My Jewish self-hatred didn’t dissipate, and I remained estranged from all things Jewish or Judaic, but he gave me, at last, a language to articulate that dissonance. ‘A Jew without Judaism’, yes indeed, Philip!

I became a Roth scholar; you don’t want that on your Tinder profile. Writing on Roth is an uncomfortable business. One of my course conveners asked me, passing the time as we waited for the other GTAs to arrive, what my doctorate was on. When I told them, Philip Roth, they witheringly replied, ‘Yuck.’ I became hyper aware of the books on their shelves: feminism and women were everywhere, and I started apologetically admonishing Roth, telling them ‘I know, I know!’ and we awkwardly laughed.

Roth is yuck, though, and discussing what makes his work so icky is important; Roth’s men cannot be rescued, nor should they be. My Life as a Man is a horror show of toxic masculinity; I Married a Communist, as Linda Grant points out, seems petty and raggedy, whilst The Professor of Desire is just … yuck.

Roth wrote men as men are today: volatile, dangerous, and desperate. He was unflinching in his portrayal of men and it is difficult confronting the misogyny bursting out from his novels, even his very best (Sabbath’s Theater, American Pastoral, The Human Stain, and The Counterlife). But Roth scholarship, I am relieved to say, does not exclusively look or sound like me.

Roth studies is not made up of Jewish men unburdening their Jewish anxieties and Oedipal dramas. Not all Roth scholars have large noses and curly locks. Aimee Pozorski, Debra Shostak, Andy Connolly, David Brauner, Victoria Aarons, Matthew Shipe, Brett Kaplan, Maggie McKinley and many, many more have produced and continue to produce rigorous and excellent scholarship that confronts the yuck of Roth in a nuanced and meaningful way.

But looking like a Roth scholar has little to do with Roth’s writings; rather, it has everything to do with antisemitic conceptions of the ‘Jew’. Nothing to do with Jewishness or Judaism, no, a J-e-w; an apparition, a myth, a timeless concept. Fluid, formless, but forever there. Looking Jewish means looking like their imaginary Jew, a Jew I am permanently estranged from, but forever associated with, a Jew whom I know nothing of, because their Jew has no knowable content. This is the Jew that looks like me is who not a Jew at all; a Jew who looks just like a Jew.

Joshua Lander
Joshua Lander finished his PhD at the University of Glasgow in 2019 and has recently completed his PGDE at Strathclyde University. He is currently researching British Jewish literature’s responses to the Holocaust.
Categories: Uncategorized 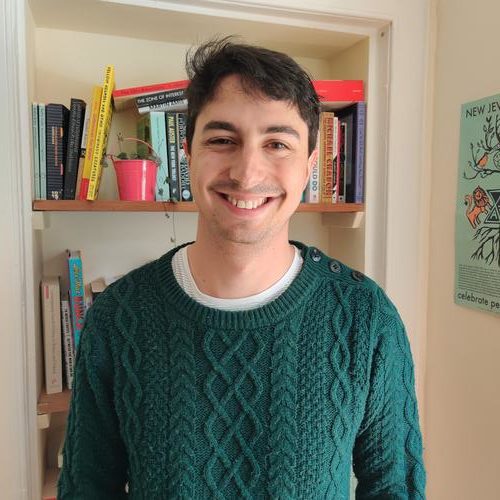 Joshua Lander
Joshua Lander finished his PhD at the University of Glasgow in 2019 and has recently completed his PGDE at Strathclyde University. He is currently researching British Jewish literature’s responses to the Holocaust.