Mila Tanya Griebel’s ‘Far Above Rubies’ kiddush cup won first prize in the 2014/2015 Judaica 21 Award. It was subsequently bought by the Berlin Jewish Museum, and features in their new core exhibition which opened to the public in August 202 this week. A matching Yad is now part of the Barr Foundation collection.

This Kiddush Cup is a physical representation of the final chapter of Proverbs, a 22-verse poem in which the Mother of Lemuel gives advices and warnings to her son. The cup focuses on verse 10 of the proverb:

‘A woman of Worth, who can find her? For her worth is far above rubies.’

The question, pierced out of the silver in Hebrew on the square holder, sits diametrically opposed to the rubies on the other side, so one can see the text highlighted in the colour of rubies as they shine through.

The answer is etched on the rim of the goblet.

The conical goblet is an abstraction of the female form, and sits above the rubies so that, at all times, the ‘woman’ is both physically and metaphorically above the rubies. I thought it fitting that the woman be the vessel for the fruit of the vine – the very essence of Shabbat, a metaphor for Woman’s role as provider, matriarch and intellectual. The silver is strong, symbolising the later phrase from Proverbs: ‘Strength and dignity are her clothing’.

Compared to modern, superficial and often over-sexualised ideals of the ‘woman of worth’, the woman of this chapter of Proverbs is defined as such by her internal qualities; she is a matriarch, respected among family (‘Her children rise up, and call her blessed; her husband also, and he praiseth her’), she is wise (‘She openeth her mouth with wisdom’), she is caring (‘she reacheth forth her hands to the needy’), she works practically (‘She layeth her hands to the distaff’).

Though the chapter explicitly states that ‘Grace is deceitful and beauty is vain’, the dichotomy of the kiddush cup is that such intangible attributes are presented in an abstract yet physical form, so that we may view them as graceful and beautiful without them lapsing into the deceit and vanity of superficiality.

The rubies set in the goblet’s base are not faceted or complex cut. This is an intentional choice to show the beauty that is often present in items which are not falsely shaped or preened.

According to the Jewish Mysticism, the poem is a reference to the Shabbat Queen, the spiritual soul-mate of the Jewish Nation. The Queen’s crown is reflected in the silver as an ethereal illusion where the cone meets the base.

This Kiddush Cup was designed for my daughter, who will have her bat mitzvah this autumn and will become a woman. As a woman of Jewish faith who grew up through the punk era, I wanted to unite my religion with my feminist ideals, and show my daughter through art how, especially in Judaism, a strong notion of womanhood plays a vital role in spiritual and ritual life. It is little coincidence that what makes a person Jewish is the faith of their mother.

Mila Tanya Griebel
Mila Tanya Griebel is a British silversmith and modern Judaica maker. A graduate of the Royal College of Art, Mila has over thirty years’ experience of designing and making Jewish ritual objects for synagogues, collections and family homes.
Categories: ArtJudaism 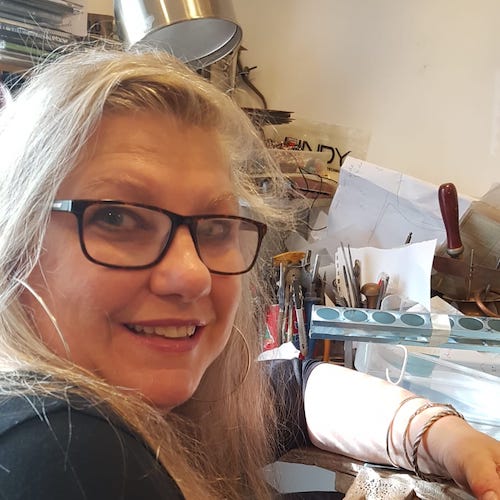 Mila Tanya Griebel
Mila Tanya Griebel is a British silversmith and modern Judaica maker. A graduate of the Royal College of Art, Mila has over thirty years’ experience of designing and making Jewish ritual objects for synagogues, collections and family homes.