Robert Katz reflects upon events that may not be precisely accurate but nevertheless reveal layers of meaning and the topography of his experiences.

In the mid 1950s, my parents uprooted our family from the congested Bronx apartment building they moved into after World War II, to a neighbourhood in Brooklyn, New York, where our neighbours were predominantly observant Jews. It was easy to be a minority in a neighbourhood enclave where everyone seemed to have the same values and customs as our family.

There was a synagogue on nearly every block, and most of the local food stores adhered to ‘kashrut’, selling kosher meats and poultry. Many of my friends attended the local yeshiva. The streets were quiet on the Sabbath. During Chanukah, most windows displayed an illuminated menorah.

When my buddies and I ventured out of the security of our neighbourhood on our bicycles, we were often reminded of our Jewishness.  The Irish kids who mostly lived in Bay Ridge, as well as the Italian boys in Dyker Heights and the African-American kids who lived in Bedford-Stuyvesant, often waited to ambush us, swiping our yarmulkes off our heads or worse, pushing over our bikes and giving us a few well-placed punches.  This was all part of the Jewish experience growing up in New York. Our Jewish identity followed us throughout our daily tasks and adventures.

While many of my friends moved away to the suburbs, my family and I stayed in the old neighbourhood throughout my college years.

Almost immediately after graduating New York University, I gathered up my few possessions and packed them into an old VW bus that I bought with all my meagre savings. I and headed for a great adventure, settling in the valley of the Clark Fork and Bitterroot rivers in western Montana.

When I drove my bus across the Yellowstone River in the early 1970s, there were very few Jews living in Montana. No one associated my surname (Katz) with being Jewish, and I encountered no prejudice or discrimination. My Jewish identity, that had so dominated every aspect of my life in New York, slowly faded away.

I became an artist.

My new friends were real life cowboys who invited me to spend glorious days on their vast cattle ranches, feeding, branding, and delivering calves from their herds of Black Angus and Herefords. I became familiar with the traditions of the rodeo.

During those years, I also moved onto a reservation where I lived among the Crow and Northern Cheyenne. I immersed myself in the religion, ceremonies and culture of the northern Plains Indians. I learned to listen intently for the vibrations of an angry rattlesnake hidden among the sage brush.

In the fall, before the first snow arrived, I joined tribal hunters, trapping beaver, seeking out elusive coyote dens. We followed the buffalo herds that grazed in the high plateaus among the remnants of ancient tepee rings and the abandon poles that once formed the structure for the Sundance ceremony.  An odd destination for a young Jew from the Orthodox neighbourhoods of New York.

One spring evening, while searching for rainbow trout with a well-respected tribal member, we suddenly found ourselves losing control of our canoe as we were negotiating the rapids of a swollen Big Horn River. In the midst of this journey, I felt a moment of particular commonality with my Crow friend who was bravely trying to control our perilous descent into the white water. I announced, ‘I am Jewish’.

The expression on his face was one of bewilderment as he screamed for me to keep paddling. My Jewish identity was of no use to me then or in the decade that followed that river trip. I was in my mid-twenties. It was the bicentennial year of our country and my personal journey on the northern plains had firmly transformed my identity.

Ten years later, I was in Kiryat Shmona, a small town in the Galilee Valley of northern, Israel situated along the border with Lebanon. It is a town that has often been under attack by Hezbollah fighters. In the mid-1980s, I was visiting this part of Israel with a group of educators on a fact-finding mission. Late one night, the sirens in the town began to blare and people fled their homes into the local bomb shelters. Concealed in the cliffs of the Lebanese mountains and under the cover of darkness, fighters launched a barrage of Katyusha rockets, landing indiscriminately into the centre of the town, striking homes and schools.

For the first time in my life, I was huddled in the dark, damp sanctuary of the shelter, praying along with others that a rocket would not fall directly upon us.

I had no sense of real time and it seemed like forever until the streets above us returned calm. I walked out of the protection of the shelter to see smoke, damaged homes, IDF troops running in every direction to ensure that no terrorist had come down from the surrounding mountains to infiltrate the town.

I walked somewhat aimlessly though the chaos until I realized that I was on an unfamiliar road, alone and disoriented. It was then, that a figure of a man appeared in the distance coming towards me.

As he approached, he loomed larger than life. His face was masked by a bushy, black beard and an Uzi rifle was slung across his chest.

There were neighbourhoods in New York back in the 1960s that were often dangerous to pass through. Violence often permeated dark streets and subways. The rule that we followed if confronted by such imminent danger was not to run, but to stand firm and reveal no fear. That was all I could do on that dark road in Israel as I was being confronted by an unknown threat.

I remember him in my dreams as a Herculean figure standing in front of me, large enough to block out the light of the moon. I could smell his breath and I cautiously raised my eyes to stare at his beard that was reminiscent of the ancient Greek sculpted faces of Zeus and Plato, or maybe more akin to Michelangelo’s imposing 14th century marble carving of Moses descending the mountain with the tablets.

He stood silent for what seemed forever, maybe trying to determine what to do with me. And then, his powerful voice broke the silence and he challenged me with a question that has stayed with me throughout the ensuing years.

‘Who are you?’ he repeated three times before I had the wits to respond.

‘I am an American’, I said with uncertainty.

‘Who are you?’ he asked again.

My identity was being challenged. I tried to stay composed, and I do not exactly recall if I declared myself a son or a father, a professor, an artist, just a temporary visitor to this dark road in northern, Israel?  Was I rich or poor? A humanitarian or a thief? Did I believe in his G-d, who’s G-d?

In that moment of potential crisis, when more than ever I needed clarity, how could I not know who I am?  As I fumbled through each answer, he became more agitated and his impatience mounted, finally bellowing out,’ YOU ARE A JEW AND DON’T YOU EVER FORGET THAT!’ He moved aside and let me pass and I did not look back.

In subsequent years and decades, as I continued my journeys back to the mountains of Montana; to the ruins of shtetls and the extermination camps of Poland and Germany; to the great walls and ancient villages of China; to the beaches at Normandy; and to the Viking settlements of Newfoundland and back to Israel, I wear a mezuzah around my neck and close to my heart. The small silver encasing holds a parchment containing a prayer from the ancient biblical text found in Deuteronomy. Over three decades after I was challenged by that bearded man on a dark night in the Galilee, I now remain firmly embedded in the Jewish identity that I acquired from my ancestors and on the streets of my old Brooklyn neighbourhood.

Robert Katz
Robert Katz is a sculptor and Professor of Art at the University of Maine at Augusta. His sculptural installations have been exhibited in museums and galleries throughout the United States. Katz serves on the Board of Directors of the Holocaust and Human Rights Center of Maine.
Categories: UncategorizedArt 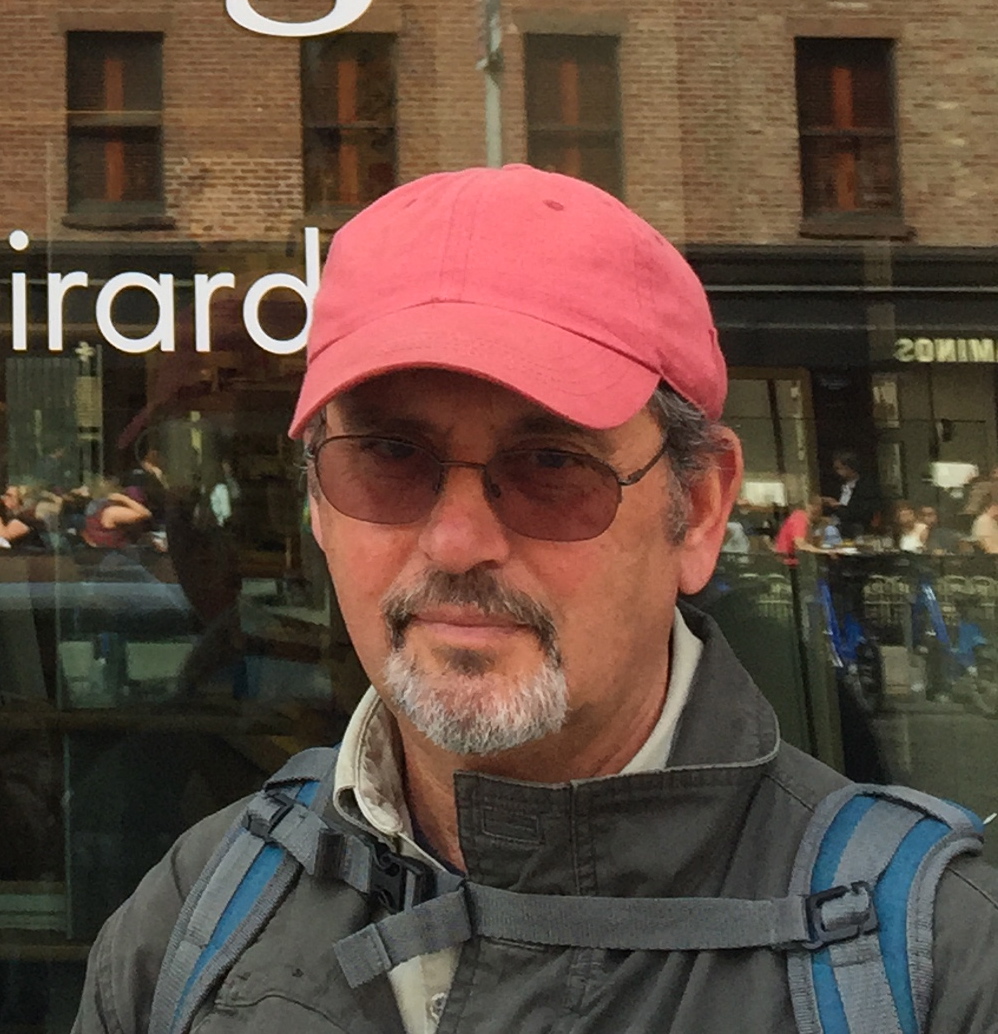 Robert Katz
Robert Katz is a sculptor and Professor of Art at the University of Maine at Augusta. His sculptural installations have been exhibited in museums and galleries throughout the United States. Katz serves on the Board of Directors of the Holocaust and Human Rights Center of Maine.