Martha Richler talks to artist and instagrammer Jo Israel about her artwork.

Perhaps you have seen photographer Jo Israel’s mysterious creations on Instagram (@jo_israel_art and www.jo-israel.com). Her transposed images are both surprising and captivating: sepia in tone, ghostly in appearance, and poignant at a time when many of us can only glimpse each other through a glass pane or foggy eyeglasses, half-concealed in our masks.

Her work looks back in time in so many ways. For photography buffs, it evokes the pioneering work of the 19th-century photographer, Julia Cameron, and for art history buffs, surrealism (with the coincidence of imagery) and early Cubism (especially the first exploratory tonal work of Georges Braque and his partner in crime, Picasso). Funny how history seems to run in a loop, sometimes – and that is exactly the connection Jo Israel is so good at capturing. There are times when the present and distant past seem to run side-by-side (Covid and the Plague, for example) and we gain new insight into both.

As a fellow artist, I first asked Jo, how does she work? In bed, in the dark, unobserved, she told me. She hunts down old images in old books – rifles through their pages, shines a torch on a single page, revealing the image printed on the back of the same page, and then photographs the way the two sides of the same page coincide, creating a dramatically new and surreal image. I love the image of her working under the blankets with a torch, perhaps the first private space a child knows.

Her images are perfect for this time of year. The Jewish New Year coincides with the end of summer, the beginning of autumn and coming to terms with the errors in our ways, and regrets. Edith Piaf was obviously not Jewish. With winter approaching now in the UK, it’s an introspective time, and with a second lockdown, especially so. The light’s falling already, and anything translucent shines. Clare Balding, the all-weather rambler, today praised the golden light of the English autumn, more golden-yellow than my Canadian orange reds. I’ve always loved this time of year – the layers of leaves on the ground, the latticework of bare branches against the grey sky. Ever since I was a child, I’ve tried and failed to preserve the skeletons of leaves. I’ve even tried to keep frosty, glittering leaves in my freezer.  If you are a butterfly-chaser too, a realist by day and an escapist by night, like me, and love things (and people) you can’t have – raindrops and leaves and clouds and loved ones who have passed away – ‘neither here nor there,’ to quote Seamus Heaney – then possibly Jo Israel’s work is for you.

Jo Israel herself is tall and dark and precise. I stumbled on a photo of her at a party, back in 2005 – it caught my attention because she’s wearing a black maillot, 1930s-style, and a white swim cap, towering over a diminutive Prince Charles, whose companion is also attentive but staid, her blonde coiffed and buttoned-up Englishness the other side of the English character from Jo’s wild eccentricity. Jo’s dada moment.

Jo at the time worked for a band called British Sea Power. She hints at a ‘backstory’ involving Joanna Lumley. I don’t ask – but she assures me she’s shy and reclusive, and I know the feeling. So am I, except on Thursdays, when I host a late-night radio show for Radio Winchcombe, on 107.1 FM and online to the world, and it’s two hours long and it’s live. Funny how artists are shy one minute and on show the next. Not sure Jo or I can explain it.

But it’s fun to think there are two sides, at least, to Jo – as in her work – and it’s the combination of the two that make her especially delightful and engaging.

To go full circle now, what drew me in was the sense of mystery in her work, but also the playfulness. And I wasn’t sure at first – were they collages, drawings, paintings? So many borders crossed. But now we’ve spoken, it’s all making sense. I’m happier now leaving the mystery unsolved. The older I get, the less I expect any answers. Curiosity is intelligence, not knowing all the answers. What’s more, this very interview for JewThink inspired her to ask more questions about her family roots.  Having looked carefully at Ghost Ship and other works (see illustrations) – and given her catchy name, too – was she Jewish? She wasn’t sure and had never asked her father directly until now. Her father, David Israel, an antiquarian bookseller, a man of stature, like his daughter, and a former boxer who once trained with Henry Cooper – a family steeped in history and books but also a Norfolk groundedness. So, her father told her, ‘Yes, my father – your grandfather – was Jewish.’ Jo’s grandfather was from South Wales, Abergavenny to be precise. She discovered there was a settlement of Jews here in South Wales in the 1100s. Just down the road from South Wales – a 40-minute drive from Ross-on-Wye, in Winchcombe, Gloucestershire, where I live part of the time, I told her I’d seen a gravestone marked Israel in the graveyard of St Peter’s Church, which made me wonder if I was not the only one of Jewish descent in Winchcombe.

So, we both discovered something, because of JewThink. Her love of books, her intellectual curiosity, her playfulness, her Mediterranean warmth – all of these aspects of her felt familiar, in that Jewish way.

Finally, I asked Jo, who is self-taught, what she might say to the kids now in school who want to study art but can’t, due to cutbacks. She surprised me by saying, ‘I’d tell them don’t worry. You have the internet, and nothing beats going to look at art.’ Her voice grew excited. ‘I love travelling to Italy – Rome, Naples, Siena, Florence.’ She loves Renaissance art. ‘Just think of who you are … try and follow a vision.’ In the meantime, while we figure things out, I don’t see why we can’t follow artists like Jo Israel on Instagram for hints on what to look for and how to see.

Martha Richler
Marf is the pen-name of Martha Richler, a cartoonist and artist with an academic background in art history (Harvard, Johns Hopkins, Columbia).
Categories: UncategorizedArt 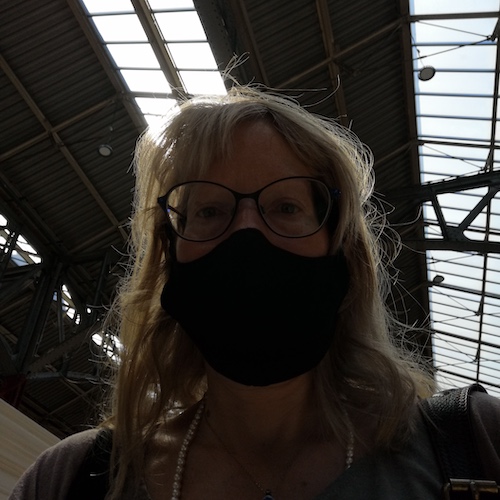 Martha Richler
Marf is the pen-name of Martha Richler, a cartoonist and artist with an academic background in art history (Harvard, Johns Hopkins, Columbia).