At the Flamingo Las Vegas Hotel and Casino

Derrida and the Jewish Question

Why Is There Resistance to A Working Definition of Antisemitism?

The Jewishness of ‘Scanners’

Is The Mandalorian a Space Jew?

Teaching Antisemitism in the Classroom

How Finland’s Jews Fought Alongside the Nazis

A Trip to (Jewish) Shanghai

In my new book, The Conflict over The Conflict: The Israel/Palestine Campus Debate, I quote a young Jewish woman’s lament: Students from every type of Jewish affiliation, from ultra-orthodox to atheist, could easily get together on Shabbat and break bread. But they couldn’t manage a communal meal if their differences were about Israel.

Twenty years ago the main internal threat to the Jewish community was believed to be intermarriage. Today it may how we vilify each other over Israel, on campus and beyond. And that’s harming our ability to combat antisemitism.

Debate is something we Jews cherish. We joke about it (two Jews, three opinions). But not over Israel. Jews who are pro-Israel are sometimes deemed racist, and Jews who are advocates for Palestinians are called ‘kapos’, with each side dipping in that foul reservoir of demonization that casts political opponents as Nazi-equivalents.

My UK friends are much more polite than we Americans, but I was startled to see the recent attack on Pears Institute for the Study of Antisemitism director David Feldman for his Guardian piece on the campus and the imposition of the IHRA definition. I was not surprised that some would have a different take. What struck me was the tone of this rejoinder. The authors could have made their case without accusing Feldman of coming ‘dangerously close to [using] a classic antisemitic trope’, or suggesting that he only spoke out about campus antisemitism ‘to attack efforts to do something about it’.

Feldman’s argument, like mine, isn’t to attack efforts to do something about campus antisemitism, it’s that imposing a definition as a functional speech code will actually harm Jewish students and faculty, as well as the academy itself. But the discussion about Israel and the campus has become so polarized that a difference of opinion about what’s best to do can be recast as giving aid and comfort to antisemites. That polarization has consequences. A Stanford study documented how some Jewish students, sensing a demand to declare their side of the Israel/Palestine debate when they begin their academic journey, decided they’d rather avoid Jewish campus life altogether.

For 25 years I was the American Jewish Committee’s antisemitism expert (I was lead drafter of the antisemitism definition while on staff). I worked with many university presidents and trained hundreds on how to handle campus bigotry. I also organized over 400 university presidents to sign onto a statement opposing the UK’s UCU’s 2007 advancement of an academic boycott of Israeli academic institutions. The first American reaction to the UCU’s vote was to suggest American universities might want to boycott British universities. But boycotts of academic institutions were anathema – that was the point. No college president would have signed onto a statement endorsing a counter boycott; hundreds said if the UCU were determined to boycott Israeli academic institutions, then count us as Israeli too. That approach underscored academic freedom. If I learned one lesson it is this: efforts to oppose campus antisemitism MUST be consistent with academic freedom and free speech, and this means rejection of hate speech codes.

I understand the sting of anti-Zionist and antisemitic speech. I’ve felt it, and I know some Jewish students do too, as documented in a recent CST report. But the point of the campus debate over contentious issues is to make sure students aren’t harassed, intimidated, or discriminated against. It’s not to shield them from ideas, including disturbing ones. As I outline in my book, there are things to be done, using the unique tools to the campus, including student surveys, better training, new curricula (including new classes on antisemitism), and better procedures against bullying. But the definition of antisemitism has become a sacred symbol, blinding us to all these things. When the IHRA definition becomes the one thing we look at to deal with campus antisemitism, a “yes” or “no” issue, our capacity to look at the problem holistically is compromised. It’s like the old saying if the only tool you have is a hammer, everything looks like a nail. We’re smarter than that.

A couple of weeks ago I asked a UK friend why he favors having universities adopt and apply the definition. He said it made Jewish students ‘feel that the university had their backs’. That reminded me of conversations with academics who support the academic boycott of Israel. They said they were at wit’s end about Israel’s actions toward Palestinians, and they ‘felt a need to do something’.

I am a Zionist, and anti-Zionism can be painful to hear. But on campus, students and faculty have a right to express these ideas and to expect those who object to push back. Asking the university to adopt a definition that says anti-Zionism is in effect antisemitism is pernicious.

There is a danger when the academy is asked to say what political views are acceptable. What’s to stop it from having other pronouncements tomorrow, ones with which we might disagree? Have we forgotten when political opponents were able to institutionalize the UN’s equation of Zionism = racism for campus application decades ago?

Look at the effect of the IHRA definition on campus speech. As much as I disagree with Israel Apartheid Week, it is free expression. Yet the Simon Wiesenthal Center not only applauded when a UK university outlawed this event based on the definition, but it also said no other university should allow it either. And as I document in my book, a UK professor was investigated after a complaint that an article she wrote violated the definition. If that’s not McCarthyism, I don’t know what to call it.

The fight against campus antisemitism has to be more thoughtful than a food fight over IHRA. Even proponents cannot believe that imposing a hate speech code that will somehow magically cure the problem, and they shouldn’t be blind to people like David Feldman and others who have rational concerns about why this step will actually harm the academy. It is also entirely unfair to presume he has bad motives.

I’m concerned about the imposition of the definition on campus, but I’m also worried about the toxic nature of the internal Jewish debate on this issue. My suggestion is that people pull back from this precipice and again model what debate in the Jewish community (and on campus) can and should look like. The field of hate studies shows how, when our identity is tethered to an issue of perceived justice or injustice, we try to reduce issues to simple terms, usually in black and white. Antisemitism is too important an issue to allow our thinking and debate to succumb to such instincts. But as long as the issue is IHRA YES or IHRA NO, it’s hard to have a rational discussion. What else should be done about antisemitism on campus? What tools are there that reduce antisemitism and enhance academic freedom (including courses on antisemitism and on how to have difficult discussions, some of which are catalogued at the Bard Center for the Study of Hate)? How do we understand harassment other groups experience on campus (LGBTQ, women, Muslims, people of color), and what changes can happen that would improve campus life for all? What new training is required for staff? What should the leaders do to improve the campus atmosphere and respond to incidents? How do we promote an environment where passionate debate is encouraged, students welcome the opportunity to wrestle with difficult and disturbing ideas, and harassment and bullying are rejected?

Having those discussions with people who promote IHRA and those who fear it, looking more comprehensively about how to approach campus antisemitism, would be a good first step.

Ken Stern
Kenneth S. Stern is the director of the Bard Center for the Study of Hate and an attorney and award-winning author. For twenty-five years, he was the American Jewish Committee’s expert on antisemitism, and he was also the lead drafter of the “Working Definition of Antisemitism.”
Categories: AntisemitismPolitics

Antisemitism and Stanley Kubrick’s ‘The Shining’

Why Is There Resistance to A Working Definition of Antisemitism?

So pleased to read this. My own university has recently had an academic board meeting to discuss some of the ihra examples which make it problematic to discuss certain propositions about Israel which are at least controversial. That means there are good arguments for and against. I wish this article could reach Gavin Williamson in his bid to make the ihra definition rigid in its imposition but he’s not the kind of person open to discussion, argument and nuance, I suspect.

This line of thought applies equally to, say, Holocaust Denial?
Or if the activity on campus extends itslef from speech to banning speech? To violence?

Kenneth Stern’s article is deceptive in several respects.
1) He portrays boycott threats (or actions) on both sides as symmetrical. &nbsp;In reality, pro-Israel interventions seek to suppress Pro-Palestine individual voices and events. BDS stigmatises and boycotts institutions, not individuals (except official representatives of the Israeli regime). &nbsp;&nbsp;
2) He portrays power as symmetrical on both sides. In reality, institutions often use their various powers to suppress pro-Palestine voices, as demanded by pro-Israel forces. By contrast, the pro-Palestine side demands the end of institutional complicity; it does not ask institutions to suppress voices. &nbsp;
3) He conceals his own responsibility for the more intense conflict over free speech.&nbsp;According to the Working Definition of Antisemitism, it is antisemitic to describe the Israeli state as ‘a racist endeavour’. Why did he include this criterion?&nbsp;He has publicly said that the phrase ‘apartheid Israel’ is ‘an accusation linked with antisemitism’; see the file, p.38, &nbsp;https://en-humanities.tau.ac.il/sites/humanities_en.tau.ac.il/files/media_server/0001/unedited.pdf&amp;nbsp;&amp;nbsp; What did he expect would be the practical use?
4)&nbsp;He pretends that the Working Definition is being abused, while he honourably stands above the conflict. Yet his authorship bears the greatest responsibility for its use in suppressing free speech.

With all due respect to Mr Stern.
There’s an example he gives here (which he has cited previously in his much touted objection to the adoption of the IHRA def as a CoC at universities)

“As much as I disagree with Israel Apartheid Week, it is free expression.”

Here’s the thing: At many universities, Israel Apartheid Week has long crossed the boundary of free expression into harassment (both psychological and physical), with Jewish students (Zionist or otherwise) being humiliated on campus (there are many reports available online). It is also clear that IAW has on many occasions crossed the line into antisemitism by comparing Israel to the 3rd Reich. Here’s where the IHRA as a CoC would come in handy for harassed students as a recourse and support. 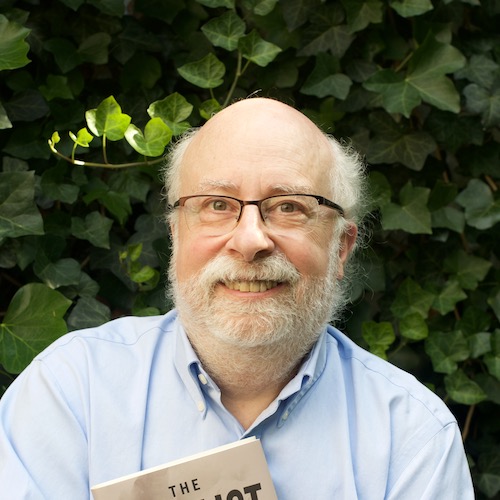 Ken Stern
Kenneth S. Stern is the director of the Bard Center for the Study of Hate and an attorney and award-winning author. For twenty-five years, he was the American Jewish Committee’s expert on antisemitism, and he was also the lead drafter of the “Working Definition of Antisemitism.”