Emma Franks, a practising visual artist describes how her brother’s increased religiosity and Deborah Feldman’s Unorthodox inspired her commitment to producing work that explores the female narrative and perspective.

In the middle of the global pandemic last year, when we noticed birdsong and the joys of being at one with nature people also discovered the Netflix series Unorthodox, a story loosely based on the 2012 autobiography by Deborah Feldman.  It seems everyone was watching it and talking about it too, even my non-Jewish friends who all loved it. I also loved the series but it was the book that really spoke to me and also hit a nerve.

I was brought up in a traditional United Synagogue family, shul on Rosh Hashanah and Yom Kippur, keeping semi-kosher at home but not out, Friday night dinners followed by Cheers (I am an eighties child) and make sure you never ever marry out.

This comfortable Judaism all changed when in my late teens my eldest brother became mega frum and decided to study in a yeshiva in Jerusalem.  I can clearly remember him returning home on a Friday night and suddenly, having never known what being Shomer Shabbat was, had to prepare for the Sabbath. I learnt that tearing toilet paper was breaking Shabbat, that from now on we were using Shabbat night lights, the hostess trolley was to be used for the pre-prepared Friday night meal to be kept warm, havdalah, afternoon shluf on a Saturday and the panic from my mum that, if she didn’t abide by all the rules, which were now too many to count, we would lose my brother forever. I became so paranoid I would break Shabbat I dreaded going to the toilet in fear that I would do something wrong.  I said to myself repeatedly ‘don’t touch the light switch, don’t use the normal toilet paper’. Everything changed for me at home and I cannot deny that it was very stressful, my brother’s religious epiphany overtook and dominated our lives.

About five years later we all went to Israel for his arranged marriage and without prior warning, my other older brother had also become Ultra-Orthodox.  I was in the lift of a hotel and the doors opened to reveal him standing in his Modern Ultra-Orthodox religious uniform of black hat, dark suit and tsitsit hanging out with the realisation that he too had turned frum. I was shocked and upset because no-one had thought to tell me this news.  As the only girl and the youngest sibling, I have always been left out of my brother’s close relationship.  Always treated differently by my family because I was a girl and now feeling even more separate as I was not religious.

How does this relate to Unorthodox?  Clearly, my story is not the same as Esty’s (or Deborah’s in the book) but for some reason when I read the book last summer a lot of her story resonated with me. I saw myself as the creative and bright Esty, desperate to live beyond the restrictions and rules of her Jewish upbringing. All my buried feelings of anger and resentment towards my brothers whose major life choices had had such a strong influence on my own without me ever having a choice, came crashing to the surface.  No longer wanting their religious way of life to impact my own, I haven’t run away from my family physically like Esty but mentally I have distanced myself from them.

The relationship with my Jewish identity has also suffered as having religious siblings forced me to think about my religion as black and white as it stops being cultural. Being Jewish was no longer just about chicken soup and kneidlach, it was about God. I was exposed to such extreme religious observance and learnt that you either believe in God and observe everything or you don’t and like me do nothing.

So when I read Unorthodox: The Scandalous Rejection of My Hasidic Roots, I was hit with a thunderbolt and I had my own epiphany. At that moment I decided It was time to heal and begin the work of trying to figure out who I was as a Jewish secular woman and to reclaim my identity in a positive and creative way.  As a practising artist I decided to do this through my work.  I focused my attention on finding strong and empowered Jewish female role models both from the bible and also within popular contemporary culture.  I made art books, How To Be A Jewish Feminist in 3 Easy Steps, and a book about Lillith, as well as a feminist tallis adorned with strong female women including the names of the forgotten women from the bible. I also sewed on to it a blessing, to thank the universe for making me a woman, an antidote to the religious prayer men say each morning, thanking God for not making them a woman.

Deborah Feldman’s story is an inspirational one and it gives me hope as it seems she has found peace and joy within our complicated and confusing religion, my only hope is that one day I will too.

This feels like a raw and brave account of a complex story, It was moving to read. I love the books and how you read them. 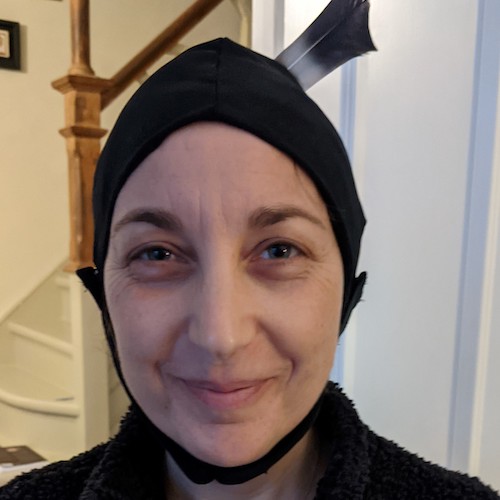 Emma Franks
Emma Franks is a practising visual artist, committed to producing work that explores the female narrative and perspective.