This illustrated story told with images and text by Helen Blejerman (translated by Adrian Nathan West) is a fictional narrative with autobiographical elements.

In the beginning God created the heaven and the earth.

And the earth was without form, and void;

and darkness was upon the face of the deep.

And the Spirit of God moved upon the face of the waters.

From the time I was a child, my mother talked to me about the metaphysical world, the plane where dreams lay, the impulses and sentiments that dwell within us, but that we do not understand. She also revealed to me the mystic side of poetry, which she and I lived in clandestinity, with books we were forbidden, but read nonetheless––aloud even, one day, so they would hear our blasphemy clearly. We shouted out poetry loud as we could so they would tell us then and there if they had anything to say. We’ve won the right to be poets, she told me. And for that reason, when I was old enough to leave the island, I left. I went to seek out my place in the world as best I could, in spite of the phantoms that trailed me. Incessantly shedding the precepts of the women who came before me but drawing on their vigour.

I wrote letters to my mother from the other continent, and she responded with real love for me, with real interest in my freedom. I ask myself does written language open us, does it make us part of this strange, erotic garden, the world of thought. If you write, you sublimate, she used to tell me. But sometimes, too, she wrote to me in the midst of her deliria, spoke to me about the demons that pursued her, that never managed to catch her, demons she believed were real. We never found out if they were so, and no one in the community could promise us they weren’t because strange things happened there on the island. But in letters, where her love and her vivid judgment triumphed, she used to tell me:

Mine sheine meidl, fly with your wings and your eagle eyes.

Explore the four points of the compass. Know yourself.

But if you cease to be happy, come back.

It’s been a few days since I heard you had died with the dawn. You showed no signs of suffering, and your body lay over the sand. We don’t know what took you to the sea, but the rabbi said you died in your sleep and that this is how the just die, especially one of a people persecuted, searching for asylum. They told me you had with you the notebook you used to write in. Where you recorded that the mehashefot were following you through the forest, leaping from tree to tree. How one day there were five of them, or seven, in white garments, with long hair. How they appeared and disappeared before your eyes. You also wrote of the dybbuk spirits that they emerged in the morning from the mist of the waves and shouted to you Karet! Karet! Sundered from God! And how they wanted to try you, to see you somehow condemned. I don’t know whether these were visions or prophecies.

Forgive me, Mother, for failing to defend you. For not keeping by your side when you trembled before the celestial vault, so implacably dark, so empty of stars. For not opening my arms to that firmament to beseech protection of your angels. Ariel! Camael! Haniel! Forgive me for not saving you.

You dead, and me so far away.

Perhaps the Golem came to life and reached you with leaden steps and dragged you down with him into the mud. A Golem jealous of our covert moments in the room with the books, reading the Kabbalah or Yanai’s chants or the verses of Eleazar Kalir; or the day you opened the Talmud and told me those texts were not theology but poetry and you covered your face and began to cry. I didn’t understand then that you were crying from beauty or perhaps from melancholy for the family you left behind. There is no greater distance between a person and her unjustly dead than the sea.

I returned to the island to take leave of your body. A body I could no longer see.

To see you, invisible, in all those places. To imagine you with the sunlight from before.

To convince myself you are no longer here. Where must our souls go?

I ask myself did your demons carry you away or give you freedom. Or did you die to grant it to me.

I returned to the island wanting to feel your spirit, your ruaj. The women had already washed your body in the perasha, they had already buried you. From outside Grandmother’s house, I heard the people pray the kaddish for you.

Can you hear the community chanting its prayers? Might your soul wander among us now? If not, perhaps your spirit will be transformed into a shell or a cluster of seaweed bobbing on the surface of the waves. A metamorphosis, into that bird that passed by soaring in the sky. Could it be that after death, we are transformed into silence… that we abide in all muted things?

Perhaps you will be that iridescent space between language and thought. Perhaps in the hidden world, of the poets you and I read together. In poetry, perhaps, which moves electromagnetically through all the things of this world, fooling us into thinking them solid. The boulder, the faraway mountain, the fields. How poetry has deceived us.

Will your spirit become sacred scripture? Illuminated manuscript? Perhaps you will be the first woman to wet her hand in the clay and leave its print on the wall of the cavern and realize she is a creator. Might it be that you were turned to a minuscule part of Elohim and His language on Earth?

I found my grandmother, bereft of her child, sitting in a cave that opened onto the sea. I hugged her, and as I felt the vastness of my love for her, a light ignited in our two bodies and we held each other amid that refulgence until she began to transform into a bear. Mama! A bear! An animal, female, powerful, a survivor, and she sat there enormous and gazed on the horizon. I too saw my body grow, my hide, and felt my blood running otherwise through my veins. We walked through the sand, two beasts, not uttering a word. The waves soaked our unshod claws, our savage, silent tracks. How I love the scent of the sea! Few things elude the ambit of prayers. Few things but filled with mercy.

Sitting shiva, we had already covered the mirrors at home with black cloth to keep your soul from taking fright on seeing itself without a body. My grandmother and I sat on the floor on cushions and the visitors came by. The rabbi prayed and we performed the kriah, tearing our clothes in a sign of mourning, the waves thundered.

May the soul of Gina Bet-Celia rest in the bond of eternal life.

May Elohim bring her under the cover of his wings

beneath the exalted spheres of the firmament.

I lived those seven days like a dream where the prayers drew on and turned muffled. Then they went silent and the visitors departed.

I gave my grandmother a kiss and went out barefoot to say goodbye to the island before going.

It saddens me that your life ended.

I will never forget you.

I hope you rise to the most beautiful and subtle circles of Heaven.

Safe travels, my love, and come greet me now and again in dreams.

The piece was originally published by The University of Sheffield Creative Writing Journal with Museums Sheffield: Route 57, Issue 16 ‘Traces’, 2020.

Helen Blejerman
Helen Blejerman is an artist and writer based in Sheffield, UK, originally from Mexico City. She works as an associate lecturer in the Department of Fine Art at Sheffield Hallam University.
Categories: UncategorizedArt

Thank you so much! 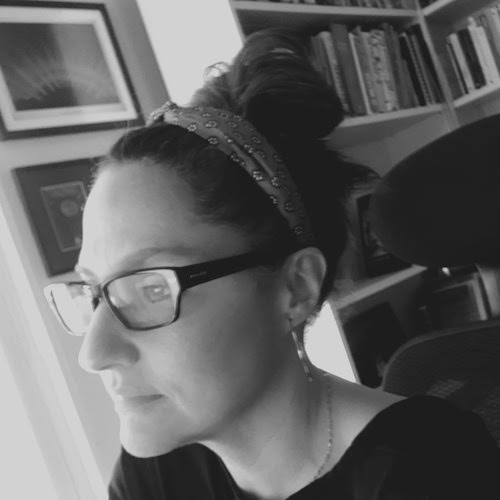 Helen Blejerman
Helen Blejerman is an artist and writer based in Sheffield, UK, originally from Mexico City. She works as an associate lecturer in the Department of Fine Art at Sheffield Hallam University.