Yiddisher Psychogeography of a Small Planet

It is now just over a year since the pandemic forced the U.K. into lockdown, during this time the promise of an expanding world with multifarious connections has shrunk. Yes, we have Zoom and other platforms, but non-virtual experience contracted with most of us being confined to our immediate locale. In March 2020, with what turned out to be uncharacteristic prescience and frank serendipity, I read Emmanuel Litvinoff’s Journey Through a Small Planet. Written in 1972, the book recounts the author’s early life growing up as a working-class Jew in the East End of London. Litvinoff’s work is visceral and intense, rekindling my own much later memories of what it is was like to live in a small planet slightly to the north of his. Inevitably, at least in my mind, lockdown created an elision between the past and the contemporaneous, stimulating reflection on how space and place create and shapes Jewishness and are in turn shaped by it.

Here is not the place to attempt any extended discussion of psychogeography, however, some contextual orientation is necessary. For simplicity, it is possible to say that there are literary and theoretical approaches. The novels of J.G. Ballard, featuring the dysfunctional effects of suburban concoctions – such as shopping malls – on the human psyche, represent a contemporary example of the former, whereas ‘theory’ is most clearly identified with Debord and the Parisian Situationist movement of the 1950s.

So how does it work and what is it that psychogeography attempts? Debord provided a clear account when he suggested that psychogeography attempts to grasp the effects of the geographical environment on the emotions and behaviour of individuals. In short, the approach seeks to map the linkages between place and mind, including any emerging reciprocal associations between them. Two terms are also important: dérive and the flâneur. The first refers to the ability to drift, almost always through the city, whilst simultaneously suspending everyday thoughts and activities so to allow the raw stuff of the environment to impress itself on cognition; the second term describes the person who strolls with no apparent purpose, but who nonetheless absorbs the ambience of the cityscape. Crucially, and in order to happen, psychogeography requires walking: contemporary practitioners such as Will Self and Iain Sinclair regard psychogeography as a form of praxis – doing or enactment being more important than analysis.

Although written in the 1970s Litvinoff’s book explores his experiences of the ‘Jewish Ghetto’ of the 1920s and 1930s, he represents therefore an important progenitor of psychogeography. He also embodies a distinctly Jewish form of the enterprise. In charting the shape and the smells of his small and bounded part of London, he produces a rich tableau of hard lives fought out against the realities of material deprivation, insecurity and, of course, anti- Semitism. He deploys a thoroughly psychogeographic method allowing the whine of machinery, the sounds of spoken Yiddish, and the comings and goings of local characters to access the deeper structures of meaning that shaped the life of the community. Throughout there is an acute recognition of people surrounded by potentially hostile others. His forays out of the Ghetto are described as visits to ‘enemy territory’, such as when he reluctantly enrols at Cordwainers College, to learn shoemaking, and is encircled by the smell of pork from the adjoining factory.

Journey Through a Small Planet provides a clear and explicit example of Jewish, or Yiddisher, psychogeography. Warm, funny and irreverent the form and structure of the work replicates the people and places portrayed with ease and elegance. It is here that Litvinoff both taps in to, and anticipates, the transgressive potentiality of psychogeography. Debord saw part of the project to win space in the homogenised city. The capacities to drift and stroll challenge the strictures of the working day imposed by industrial capitalism. The discipline of production is eschewed in favour of pre-capitalist purposeful activity. Similarly, focussed trespass in areas closed off by corporate development allows for space and place to be temporarily reclaimed. For Litvinoff transgression is about the assertion of Jewish identity, through space and place and the operation of the mind. It is the warmth and uneven cohesion of what he is a part of, and what he engagingly describes, that confronts and finds a way through the Anglo-centric orthodoxy surrounding him. Problems of survival and Being a Jew in England are integral to the epilogue of the work, but perhaps more striking is the contribution of this small book, in its evocation of locale, place and identity, to Litvinoff’s trenchant poetic critique of T.S. Eliot:

Eminence becomes you. Now when the rock is struck
your young sardonic voice which broke on beauty
floats amid incense and speaks oracles
as though a god
utters from Russell Square and condescends,
high in the solemn cathedral of the air,
his holy octaves to a million radios.

I am not one accepted in your parish.
Bleistein is my relative and I share
the protozoic slime of Shylock, a page
in Sturmer, and, underneath the cities,
a billet somewhat lower than the rats.
Blood in the sewers. Pieces of our flesh
float with the ordure on the Vistula.
You had a sermon but it was not this.

It would seem, then, yours is a voice
remote, singing another river
and the gilded wreck of princes only
for Time’s ruin. It is hard to kneel
when knees are stiff.

But London Semite Russian Pale, you will say
Heaven is not in our voices.
The accent, I confess, is merely human,
speaking of passion with a small letter
and, crying widow, mourning not the Church
but a woman staring the sexless sea
for no ship’s return,
and no fruit singing in the orchards.

Yet walking with Cohen when the sun exploded
and darkness choked our nostrils,
and the smoke drifting over Treblinka
reeked of the smouldering ashes of children,
I thought what an angry poem
you would have made of it, given the pity.

But your eye is a telescope
scanning the circuit of stars
for Good-Good and Evil Absolute,
and, at luncheon, turns fastidiously from fleshy
noses to contemplation of the knife
twisting among the entrails of spaghetti.

So shall I say it is not eminence chills
but the snigger from behind the covers of history,
the sly words and the cold heart
and footprints made with blood upon a continent?
Let your words
tread lightly on this earth of Europe
lest my people’s bones protest.

The exigencies of lockdown have reintroduced a contracting world. In my case, a collateral effect has been to allow reflection on the way in which small planets can be accessed by the dynamics of Litvinoff’s approach. Psychogeography permits mental as well as physical travel – the verb robinsonner describing the act of engaging in virtual journeys. Just as Litvinoff does this from the 1970s to his childhood, I have attempted to do this in a modest way through pandemic localism. Living in a part of the North West of England without a bagel shop in sight, my reflection has involved mental travel impelled by the happy discovery of Litvinoff’s work and also by a great deal of parochial walking. I am pleased to say that my identity is more firmly intact than ever.

David Balsamo
David Balsamo is Dean and Professor of Sociology at the University of Chester where he specialises in the study of work and complex organisations. Before entering academia David worked as a painter and decorator, operating theatre technician and probation officer. Originally from North London, now based in Chester, he is a dog walker, cyclist and amateur psychogeographer.
Categories: BooksUncategorizedYiddish 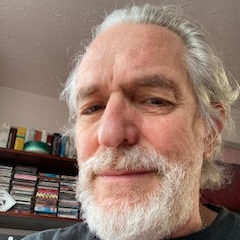 David Balsamo
David Balsamo is Dean and Professor of Sociology at the University of Chester where he specialises in the study of work and complex organisations. Before entering academia David worked as a painter and decorator, operating theatre technician and probation officer. Originally from North London, now based in Chester, he is a dog walker, cyclist and amateur psychogeographer.