israelZionism
May 9, 2021
by Jayden Martin

Jayden Jasper-Lee Martin expresses his passion for the achievements of Zionism, Israel, and the Jewish people, to which he seeks to lend his voice to support.

In recent years the social and political Left’s preoccupation with denouncing Israel and its increasing support of the Boycott, Divest, Sanction (BDS) movement has proven particularly infelicitous, for the Left often predicates itself on ideals such as indigenous rights. Instead of seeing Zionism and Israel as the living embodiment of this hallowed leftist principle, many on the Left actively pillory Zionism and its successful culmination, Israel, variously with the following epithets: ‘colonial-settler state,’ ‘apartheid state,’ ‘ethnic cleansing,’ ‘genocidal,’ among others. The paradox in this is that Zionism should be a model movement and Israel should be a model state to all indigenous and freedom-loving people everywhere.

The derogatory connotation that ‘Zionist’ has taken in many leftist circles generally precedes or outright ignores its actual well-intentioned denotation of the belief in the right of the Jewish people to exercise self-determination on their homeland. Though the modern movement was formally initiated in 1897 under Theodor Herzl, the sentiment behind the eventual movement persisted for centuries wherever Jews found themselves outside of the Land of Israel. For millennia outside of their land, Jews have prayed or sung the phrase ‘Next year in Jerusalem.’ Thus, the movement for the return was but the outgrowth of the age-old yearn for the return. Therefore, the founding of the State of Israel in 1948 represented not the birth of a nation-state, but the rebirth of an ancient one.

As to the question of the Jewish people’s indigeneity to the Land of Israel — genetic testing and archaeological evidence attest to this, despite asinine myths like the Khazar hypothesis. The ancient work of men like Josephus proves that written historical records attesting to the Jewish connection to the land abound. Therefore, the narrative that Zionism is colonialism is either nothing more than antisemitic drivel or grave historical ignorance. Israel is neither a colonial settler state nor an imperial power; it is a rare instance of a people reviving a lost civilization.

In the wake of the community’s latest and most disastrous experience with genocide, one of Israel’s founding purposes was to act as a refuge for people who have been relentlessly persecuted throughout the ages. Indeed, according to historian Ben-Zion Netanyahu, Jewish history is ‘a history of holocausts.’ This persecutory spirit has persisted even unto recent history, manifesting itself in the ‘Zionism is racism’ United Nations General Assembly Resolution 3379 (though this was repealed in 1991, this will forever be a blight upon a body that was founded to consign itself to humanitarian ideals).

However, the Jewish people’s unwavering belief in themselves, despite millennia of Gentile persecution, has not prevented them from contributing significantly to humanity and producing some of the finest minds in history, as demonstrated by great minds like Maimonides, Karo, Spinoza, Oppenheimer, and Blass, to name a few. This achievement is all the more commendable considering their historically relatively small population. It speaks volumes about the power of self-confidence. The Pan-African leader Marcus Garvey said it best — ‘without confidence, you are twice defeated in the race of life.’ The Jews possess this self-confidence in spades.

Alongside the establishment of Israel, one of Zionism’s greatest accomplishments was the revival of Hebrew — the only language to hold the distinction of being revived. For these people to revive the language of their forefathers is but one testament to their greatness as a people. Their courageous spirit weathered the conquering impulse of numerous empires and continues to stave off those who threaten to annihilate the Jewish state and the Jewish people. Two millennia after the Roman expulsion from Judea, much the of Jewish people find themselves in the State of Israel, which is today, a bastion of Jewish freedom. Tech-start-ups, scientific achievements, and the enviable military of Israel continue to position the Jewish people as a people who astound the world. By this, I do not mean that there should be uncritical support of the Israeli government. But the right for the State of Israel to exist is inalienable.

The paradox that many of the same people who would support Irish nationalism, Tibetan independence, and many other indigenous or national independence movements would take a hostile stance towards Israel is so irreconcilable as to be understood as nothing more than the continuation of the interminable thread of antisemitism. Though I write this at the risk of alienating myself from many of my social justice peers, I have always stood by the principle of conviction against the tide of iniquitous mass conscience. This is why men like Israeli President Chaim Herzog, who condemned Resolution 3379 at the UN, stand as giants in my estimation. He stood as a voice of his people and preserved their dignity in the face of a hostile world stage. My familiarity with the history of these people has strengthened my crusade on behalf of my own people and other peoples.

What is nobler for a people than to exercise self-determination in their homeland? As a Black man in America and a member of the African diaspora, for years I have identified with the Jewish people’s millennia-long struggle for self-determination, and I announce my solidarity with the Jewish people, Zionism, and Israel, even when it is not popular to do so. Am Yisrael Chai.

Jayden Martin
Jayden Jasper-Lee Martin is a scholarship student at the Harriet L. Wilkes Honors College of Florida Atlantic University and a regular contributor to the Paradigm Press, who believes in civic engagement and self-determination for all people.
Categories: IsraelUncategorized 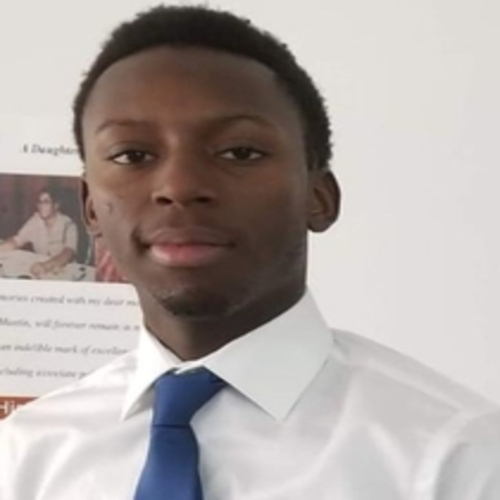 Jayden Martin
Jayden Jasper-Lee Martin is a scholarship student at the Harriet L. Wilkes Honors College of Florida Atlantic University and a regular contributor to the Paradigm Press, who believes in civic engagement and self-determination for all people.