Leigh Janiak’s Fear Street is the story of a scapegoat revealing the truth. The enemies in this story? On a textual level, ambiguous prejudice; human hunger for power; the fear of not having control over one’s life and actions. On a subtextual level, systemic inequity; axes of domination; realities of disempowerment; and recidivism in a society founded based on Puritan values.

Janiak majored in Comparative Religious Studies at NYU, before receiving a PhD in Modern Jewish Literature at the University of Chicago. This education informs Fear Street. While not inherently Jewish, I found Janiak’s critiques of Protestantism’s legacy on American culture to be deeply validating and timely. Fear Street is inspired by the R. L. Stine book series of the same name, adapting large parts of its plot.

What drew me into Fear Street was its lesbian main character, Deena, whose girlfriend, Sam, has left her and the crime-ridden town of Shadyside for the peaceful, low-crime Sunnyville. This is one of the first subtextual references to cemented racial inequity in Fear Street: Sunnyville characters, including Sam, are shown to mostly be white, while Shadyside characters are largely not. Sam, afraid of being publicly out as a lesbian, has moved to Sunnyville with her mother after her parents’ divorce – and gotten a boyfriend. These acts of assimilation parallel the white flight of ethnic groups such as Italians, Irish, and Ashkenazi Jews from urban centres to suburbs. The book series’ covers only featured characters that looked white.

The first episode opens with another crime occurring in Shadyside, which has a long history of individuals ‘snapping’ and engaging in mass murders. Several protagonists and side characters place blame for these crimes on possessions by Sarah Fier, a witch who was executed three hundred years prior, but Deena is unconvinced – until Sam shows signs of having been connected to Fier and previous killers after bleeding on what turns out to be her grave. All of Shadyside’s previous killers are resurrected, and the only thing that stops them is Sam’s death. She is later resuscitated, and I let out a sigh of relief – lesbians don’t die in the end. At least, not in this episode. Sam, however, is immediately possessed by Fier. Or, so we think.

After hearing the story of C. Berman, the only person to survive a previous mass-killing in Shadyside, Deena, Sam, and Josh (Deena’s younger brother) manage to contact her. When we hear her story in Part II, we see how the story of Sarah Fier is used to justify cruelty between children; refusal to address systemic issues in Shadyside, or try to improve its crime issues, and is even used as a complicating factor in discussions of the mental health or upbringing environment of perpetrators. We also catch a glimpse into the backstory of Nick Goode, the sheriff who initially goes to the scene of the crash where Sam got her blood on Sarah Fier’s bones.

At the end of this episode, via a combination of astral projection and time travel, Deena is shot into the body of Sarah Fier. In the final instalment of the trilogy, she lives out Sarah’s life, starting from her settlement’s initial problems that accumulated and escalated until she was blamed and executed. Notably, the actors in Part III are the same as those in Part I. I feel that the use of the same actors makes the scenes more believable. In this episode, one lesbian does die at the end: Sarah, punished for her love of Hannah; her outspokenness; and her free spirit.

As it turns out, one family of wealthy white men who settled Shadyside and Sunnyvale three hundred years ago have been making deals with the Devil, choosing to sacrifice a person of their choosing to him – in exchange for money and power. Metaphorically, Janiak may be critiquing how white settlers in the Americas lost their humanity and gained wealth and stability by eating each other and the Other: Africans and Indigenous people. Today’s modern suburbs are treated with a similar air: They’re invading our communities! Her use of themes relating to religious and ethnic hysteria draw parallels between the Spanish Inquisition, which primarily targeted Jews, and the Salem Witch Trials. Thus, the Salem Witch Trials are recontextualized. In Puritan America, there were no Jews that settlers could scapegoat for problems in their communities. They turned on each other – and on the Indigenous and African people in, or in proximity to, their communities. Thus, the most vulnerable in their communities suffered. Neither the Inquisition nor the Witch Trials solved their respective societies’ problems or turned them into paradises. They did, however, allot money and power to torturers and instigators.

Like Jews in the mind of the antisemite, Sarah Fier is allotted a significant amount of power, distracting average Shadysiders and Sunnyvillers from uncovering what could really be wrong with Shadyside (not that the perfectly content Sunnyvillers want to). Instead of uniting to help one another, citizens in each town blame a spectral figure for continued social and economic problems, refusing to acknowledge their potential power when working together across geographical and economic boundaries. Similarly, many issues today (poverty, homelessness, mental illness, stochastic terrorism) are blamed on chemical imbalances and individual failings, not the issues that lie at their roots (unfair wages, lack of social resources, the stresses of modern life [including climate change and unfair wages…], white supremacy) for fear of knocking the powerful off of their thrones. Without addressing the roots of these issues, and with no respite from them, we are doomed to repeatedly lapse into them.

When the Goodes’ hold over the town is shattered by the death of Nick, problems begin cropping up in Sunnyville, and Shadyside becomes a better place to live. Sam and Deena go steady. In a word: balance.

In Janiak’s campy, delicious Fear Street, the true enemy of justice and safety is an unbroken chain of inheritance and an unequal distribution of resources; it is the sacrifice of one’s humanity for the sake of holding onto power, even if that power is how one is perceived, located entirely in their ego. Could you imagine, ask Janiak’s films, sacrificing someone else – and by extension, your humanity – for the sake of anything? Her films ask us to respond to that question with a firm No – and a hopeful look to the future, where total assimilation, sacrificing others and ignoring others’ humanity are not necessary for happiness. In Janiak’s story, the scapegoats manage to take back power and tell the truth.

Mirushe Zylali
Mira is a writer and maker who roots herself in Mizrahi feminisms. She received her Bachelor of Arts in Religion and Studio Art from Mount Holyoke College in May of 2021. Her love for the global mosaic of Jewish and Muslim peoples knows no bounds, informing all of her work and her future hopes for a just world.
Categories: Uncategorized 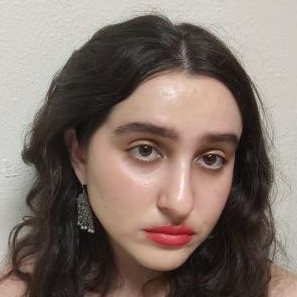 Mirushe Zylali
Mira is a writer and maker who roots herself in Mizrahi feminisms. She received her Bachelor of Arts in Religion and Studio Art from Mount Holyoke College in May of 2021. Her love for the global mosaic of Jewish and Muslim peoples knows no bounds, informing all of her work and her future hopes for a just world.