Joseph Finlay reviews the history and politics of Ridley Road and prays there is not a second series.

Before September 2021 I didn’t know I needed a BBC drama about British Jews fighting fascists in 1960s London. And having seen all four parts of Ridley Road — I’m still not sure I do. As a drama, it was a pretty weak, camp, schlocky thriller livened up with short bursts of period footage of swinging London. But as a case study in cultural politics and representation, it was utterly fascinating. Inevitably though, it revealed more about our times than the era of the miniskirt and the Beatles.

The series, based on Jo Bloom’s 2015 novel of the same name and adapted by Sarah Solemani, is rooted in real events. Around these, however, an awful lot is made up. The villain of the piece is Colin Jordan, the neo-fascist leader of the National Socialist Movement (NSM). In this period, other fascists like Oswald Mosley, sought to jettison their antisemitism, as it was rapidly losing them credibility, and instead campaigned against Black and Asian immigration from the New Commonwealth. Jordan, however, had not got the memo, continuing to sing the old Nazi tunes, and billing the purpose of his well-publicised July 1962 Trafalgar Square rally to ‘Free Britain from Jewish control!’. In what would later become known as the ‘great replacement theory’, Jordan claimed that Black immigrants were merely pawns of the Jews, who were bringing them to Britain to undermine the white race. It was genuinely shocking to Jewish communal leaders that such claims could be made in such an iconic space, with seemingly no legal recourse. It was a factor in the creation of the first Race Relations Act three years later and in Jewish support for that Act.

The first and most successful episode of Ridley Road featured this rally, as our heroine, Vivien Epstein, slightly implausibly stumbles across it, having fled to London to escape a marriage to the dullest of dull Jewish men. It seemed that the rest of the series would follow on from this; an enjoyable range of scraps and brawls between the 62 Group and assorted neo-fascists on the streets of London throughout the 1960s, of which there were many. A subplot about Stevie, a Black colleague in the hairdressers where Vivien gets a job also holds promise, as Stevie is involved in anti-racist activism and comes to erroneously believe she has become a fascist. Both options are sadly played down as Ridley Road chose instead to focus on a few months in 1962 when, Jordan, alongside other fascists such as John Tyndall and Martin Webster, was attempting to set up a private militia called Spearhead for which he was sent to prison for nine months in October 1962. Without being very clear about it, Ridley Road is a dramatization of the period between the Trafalgar Square rally on the 2nd July and Jordan’s arrest in mid-August.

Bloom and Solemani’s dramatic hypothesis is that the 62 group, and in particular Vivien (modelled on the 62 group’s sole female member Monica Medicks) engaged in espionage against Jordan and Spearhead that led to their arrest. There’s no evidence that this happened. There’s not much known about the 62 group in general, a smattering of documentation and a few archive files, such as that drawn up by Special Branch. But nothing to compare to the much better known and documented 43 Group, for which we have insider Morris Beckmann’s insider memoir and Daniel Sonnabend’s recent We Fight Fascists. Perhaps surviving 62 members will publish their accounts or give interviews (like the recent comments here by founding member Jules Konopinski). If Bloom and Solemani did discover that Medicks did go undercover into the NSM and brought evidence of Spearhead to the police, it would be extremely helpful if they could publish the documents or interviews. Otherwise, we can presume it is an invention that facilitates a distinctly B-movie type plot. We end up with an awful lot of screen time spent on Agnes O’Casey as Vivien and Tom Varey as her lover and accomplice Jack, creeping around a stately home trying to spy on the fascists who are generally too dim to realise what is going on.

Ridley Road includes one lethal event: the Stamford Hill Yeshiva fire of November 1964, though it brings it forward to 1962 to locate it within the show’s timespan. It chose to include this because the death of a yeshiva student in the fire allows Ridley Road to depict Jordan as an actual threat to Jewish lives, a latter-day Hitler. Police reports at the time, however, considered the fire an accident, and not connected with the spate of arson attacks on synagogues in 1965 in which thankfully there were no casualties.

That spate of attacks between March and July 1965, the first of which burned Brondesbury Park Synagogue to the ground was genuinely terrifying to many British Jews. What must have seemed like a groundswell of violent attacks on Jewish property turned out to be the work of a small number of NSM members, commanded by Jordan’s wife, Francoise Dior, who was sent to prison for if for 18 months in 1968. Members of the 62 group were instrumental in persuading one of the culprits to confess and inform on his collaborators. It was a moment of genuine fear for Jews in Britain, arguably the last time British Jews collectively faced such a concrete physical threat, and I can’t help but think that Ridley Road would have been more successful had it been wholly or partly based around this.

Of course, the drama is really about now. The publicity for the programme sought to connect the drama to contemporary antisemitism, and the casting of both Eddie Marsan and Tracey-Ann Oberman was surely due to their recent social media activism, casting the 62 group as a rather more fun in-person version of Labour Against Antisemitism. But Brexit also played a role, with assorted fascists and fellow travellers making a range of distinctly 21st-century comments about taking back control and combatting the power of large corporations. Telegraph columnist Alison Pearson weighed in over this, accusing Ridley Road of exaggerating the 1960s fascist threat to attack the Brexit movement saying that the only threat to Jews comes from the left. She failed to appreciate the way that Ridley Road sought to connect Jordan to Corbyn as much as to Nigel Farage and Vote Leave, or the fact that the Brexit movement has touched on Jewish cosmopolitan tropes such as opposition to ‘globalists’ and Theresa May’s infamous ‘citizens of nowhere’. And the fact that while the contemporary far-right is largely organised around Islamophobia, fascists do continue to target Jews, as evidenced by the hijacking of a Zoom service of Jackson’s Row Synagogue in Manchester soon after it was featured on the programme (and possibly in response to it). More broadly, the series captures well our contemporary Jewish politics; where a high degree of fear of antisemitism (often out of proportion with reality) is coupled with a fervent desire to be a lone hero fighting against it, with every social media warrior a Judah Maccabee in the comfort of their own bedroom.

Finally, we need to say something about the ending, which took the show far beyond the boundaries of plausibility. Jack, who has been rumbled as an anti-fascist infiltrator, is presumed dead, having been beaten by the fascists and thrown out a moving van. Vivienne has born the news stoically and returned her hair back from a bottle blonde to her natural dark brown (Jews with naturally fair hair are forbidden to appear on television and film according to a law dating back to Mount Sinai), and is shown at an airport with her parents. They tell her they are proud of her and understand that they will not hear from her for a long time, clearly implying that she is going to be a spy. She then gets on a plane, using the passport of Roza, a Holocaust survivor who has been living with Vivien’s family for many years. The idea that the UK would allow a person to travel on a Nazi-era German passport in 1962, 17 years after the collapse of the Reich stretches credibility any remaining credibility to breaking point. Plausibility is fully shattered when Vivien sits down on the plane and a man puts his hand on her knee: it is Jack! Wearing…a black hat! No fascists will recognise him clothed in a Haredi outfit! So, our hero and heroine are flying to Tel Aviv, with thin new identities, presumably off to work for Mossad. No doubt infiltrating a tiny fascist base in the home counties has trained them well to go undercover in Nasser’s Egypt or whatever their next mission is going to be. This ending represents a kind of Jewish wish fulfilment: a family reunion, something connected to the Holocaust and something connected to Israel – let’s hope nobody tries to make any sense out of it. And for our part, let’s pray with all our kavannah that it’s not a setup for a second series.

I am now aged 96 and lived in London in the 1950s and 60s I have it my mind that I joined an organisation called YELLOW STAR. We went to Ridley Road to peacefully picket the antisemitic meetings each of us wearing a yellow star. But I have never seen any mention of this organisation. Is it a figment of my imagination? Eric Walker

Hi Eric, it definitely existed! I write about it a little in my research. I think it only lasted a year or so. 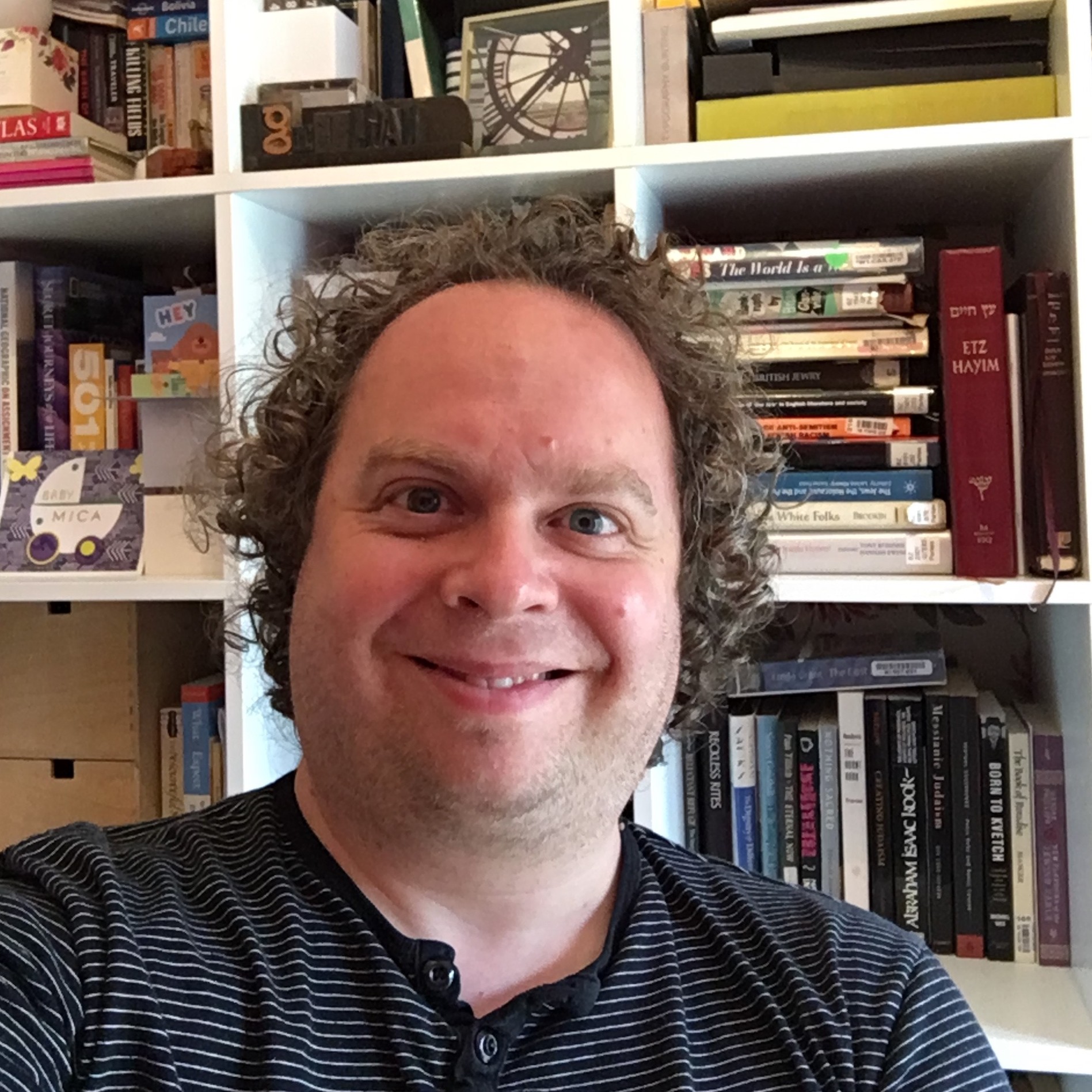 Joseph Finlay
Joseph Finlay is a PhD student researching Jewish responses to Race Relations in Postwar Britain at the University of Southampton.