In the preface to the new edition of The Flying Camel, Loolwa Khazzoom explains how her book was birthed in 1992, and how to use it in 2022.

I began compiling and editing the stories in this anthology back in 1992, shortly after graduating college. I finished editing the first version of the first edition in 1993 and subsequently spent shy of a decade attempting to get it published – approaching countless agents and publishing houses, and receiving so many rejection letters that I could have wallpapered my apartment with them.

If this had not been an anthology – if I had not promised the women in the book that I would “bring to light” (aptly, the Hebrew translation for “publish”) our stories, I would have given up, without a doubt. I was, however, a woman of my word, so I plodded on.

Then 9-11 happened, and there was a dramatic shift of consciousness. Suddenly, everyone wanted stories about Middle Eastern and North African women – so much so, that I had to change the original title of the book, Behind the Veil of Silence because everyone and their dogs were writing about women and veils. With the help of a good friend, I overhauled my pitch for the book and approached a new round of agents, who jumped at the chance to represent the anthology. Ultimately, I published it with a company that had rejected it five years prior.

By the time the book went to press in 2003, I wanted nothing to do with it. Ten years of relentless pitching is exhausting, to say the least, and one of my common refrains had become, “Get! This! Off! My! Desk!” So I did a five-city book tour (in a wheelchair, nonetheless, being that I had just been badly injured in my knee) and called it a day. I think it is safe to say that I literally did not look at the book again for years.

But time marches on; things change; and gradually, I began peering at the book “out of the corner of my eye” – as my mother would put it – then picking it up and flipping through the pages, and finally, sitting down and reading it again. Wow, I did this? I would think to myself.

Compiling an anthology, I had discovered those decades prior, was exponentially more challenging than writing my own book. While all the women had compelling stories and important contributions, not all were strong writers – meaning I had to more or less overhaul some of the writing, while remaining true to the voice of the writer. (That was my first experience channeling someone’s essence – a practice I would do repeatedly, decades later, while running a PR company.) I additionally needed to edit the diverse voices and stories in the book, in a way that provided coherency between them – while, again, retaining the authenticity of each voice and the integrity of each piece.

It was a tall order. And totally worth it.

Those notes touched me deeply.

My mother told me, several times, that every one of those notes represented numerous people who had similar experiences but never had contacted me. And so, over the years, when I had a crisis of faith or felt like a failure for not overcoming some obstacle (yet), I would think about those notes, dust myself off, and get back up on my proverbial horse.

I wish I could say that this book is no longer as revolutionary, cutting-edge, or as needed as it was when I began compiling it in 1992, but unfortunately, that is not the case. Even though there have been changes – shifts in consciousness, language, and even representation – Mizrahi and Sephardi women remain overall excluded, in theory and practice, from spaces for women, Jews, Middle Easterners, people of color, LGBTQI folk, and even Mizrahim and Sephardim. In addition, so many of the presumably inclusive conversations about us seem basic and superficial, with an undertone of it being a really big deal that these conversations exist at all.

So despite the changes, I often find myself bored and irritated by what passes for public discourse on topic. I want to flee – somewhere else, anywhere else.

Mizrahi and Sephardi women are people. Complex people with complex relationships – with ourselves, with each other, with our loved ones, and with every permutation of every community to which we belong (or don’t belong, but should). We are living, breathing, here, today. As such, we need to be an integral part of the fabric of discussions about everyday life and every consideration about that everyday life, not just relegated to some special interest conversation about identity.

In my Kitchen Pirates video series, for example, where I teach my renegade approach to a whole-foods, plant-based diet (which I developed following a cancer diagnosis, 11 years ago), I use Middle Eastern ingredients like date syrup and cardamom, and I share Iraqi Passover traditions and stories about how my Iraqi aunts cooked. It’s not a big deal. It’s not a Mizrahi cooking segment. It’s just part of who I am, and it emanates forth organically as such.

But we have to start the shift in consciousness somewhere, to dive deep beneath the surface. This book is a place to start.

The 2022 additions to this book primarily reflect my own evolution from community representative to independent artist: First, the new introduction explores my journey back to my lost-love of music, drawing from a powerful interview with celebrity Yemenite-Israeli band A-Wa. Second, the poetry section shares my original poems, which I developed over the years. Each poem from my life is matched to an essay with a similar theme from that contributor’s life.

Third, the comprehensive study guide is designed to help readers deeply and personally engage with the book, bringing the stories and poems to life, and driving home the unique takeaway lessons for each individual reader. This guide has the potential to inspire not only profound contemplation but also direct action, and professors may find it particularly helpful for teaching students in Gender Studies, Jewish Studies, and Middle Eastern and North African Studies.

The anthology otherwise remains unaltered, in its original 2003 form – including the biographical information about the contributors, which is sure to have changed in the decade since publication of the first edition. If you are particularly moved by any of the essays in this book, I encourage you to look up that contributor, follow her work, and reach out to let her know how her words touched your life. With all the technological advances in the past decade, it is easier than ever to form meaningful connections with people worldwide.

On that note, my 2022 vision for this book is to give it flight, like the camel in the title, by leveraging technology and all the opportunities that come with pandemic-era virtual living. Along with the book as a foundation, I now offer live programs on Zoom – incorporating personal storytelling, music, and spoken word performance, supported by facilitated, heart-centered conversations – all rooted in the topics addressed in the essays, and taking them to the next level. I also am in the process of organizing virtual open mics, where we can share and celebrate the personal stories and artistic self-expression of Mizrahi and Sephardi girls and women, drawing authentically from our heritage and lives, as we each see fit.

Be part of The Flying Camel movement, at KHAZZOOM.com/TheFlyingCamel.

Loolwa Khazzoom
Loolwa Khazzoom (KHAZZOOM.com) is an Iraqi-American Jewish musician, writer, and educator. She is the editor of The Flying Camel: Essays on Identity by Women of North African and Middle Eastern Jewish Heritage, and her work has been featured in top media including The New York Times, Marie Claire, and Rolling Stone.
Categories: JudaismCommunity 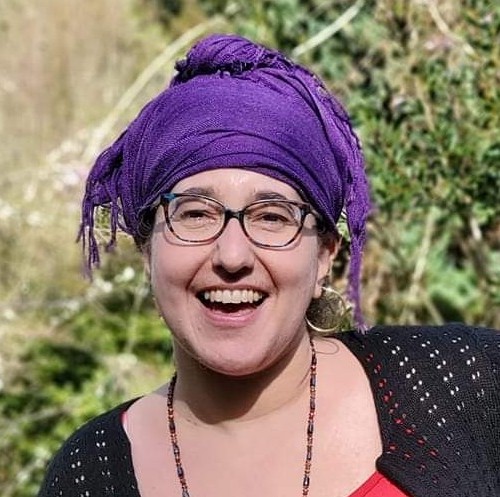