Elliot Gertel reviews the American sitcom Ghosts based on the British series with the same name.

Ghosts, transposed from a British series to American TV by Joe Port and Joe Wiseman, is the most-watched new sitcom on the CBS Network. In it, a young overworked New York couple, Samantha “Sam” (Rose McIver) and Jay (Utkarsh Ambudkar), inherit a handsome but run-down old Hudson Valley mansion, which Sam hopes to renovate into a bed-and-breakfast. It turns out that the manse and grounds are haunted in various wings and levels by ghosts who died on the property in different ways, in disparate eras, and who have been condemned to remain there in a kind of purgatory, for reasons to be explored.

After a fall, Sam develops the ability to see the gossipy and self-absorbed spectres, and reports on their antics to her husband, who immediately becomes convinced of their existence. The ghosts take an instant liking to cable TV and the internet.

Of all the ghosts, Trevor is the most likely to act and to act up. It helps that his “ghost power” is the ability to (very slowly) move objects. He practices moving a vase to scare the new owners. But he can also feel guilt. After Sam trips on the vase and recovers from a two-week coma, Trevor exclaims, “O, thank God! Is there any scarring? How’s the punim [Yiddish, based on Hebrew, for “face,” untranslated]?

Trevor comes on to Sam. At first, opposed to the bed-and-breakfast concept, he declares: “No hotel, but the hot chick stays.” He propositions her: “Leave him, kill yourself, become a ghost and get with me.” He even body shames her when he feels rejected by her. And all this in-your-face sexual propositioning combined with “Jewish stuff” is in the first two episodes, written by Port and Wiseman.

But Trevor has his preachy side. In an episode by Talia Bernstein, he urges the other ghosts (afraid of losing TV privileges) to join him in admitting that they inadvertently started a gazebo fire for which the owners blame local teen Halloween pranksters. Yet Trevor can’t help slow-clapping himself to compliment himself on his virtue, even as he has continued to make his signature sex-orgy jokes. By the third episode, Trevor has exhibited a perverse joy in straight-laced ghosts using vulgar expressions without knowing it, even as he blurts out his first “Mazal tov.”

Trevor’s biggest life regret is not having been invited to a yacht party (where he had hoped to “make out”), though he did relish being asked to attend “Lori Shendler’s bat mitzvah—pretty exclusive.” But in one episode, he exhibits a genuine paternal concern. After requesting that Samantha search the internet for a certain “bottle service chick” to whom he had taken a fancy, he discovers that the woman has a daughter who just celebrated her twenty-first birthday. Convinced that the young woman is his biological daughter, Trevor apologizes for having said anything objectifying women (that is, most of his remarks). But once he finds out that she is not his daughter, he blurts out, “She’s hot and not my daughter. She checks every box.”

Trevor is a resourceful spook. We learn that the ghosts have a sense of smell (they like to smell food) and that they still have a sexual drive. Trevor wastes no time in figuring out how to post an internet dating profile, and explains that he “just wanted the validation.” The problem is that he used Jay’s computer to lure a young woman to the house and that that young woman, Bela, turns out to be Jay’s sister, who is deeply hurt and begins to lose hope in finding love. Jay and Sam have to tell her about the ghosts and, interestingly, she does not require much convincing. Were writers Julia Harter and Ian Murphy offering generational commentary?

As for Trevor, he gets to preach again through Sam’s mediation: “I talk a big game but the truth is I really did want to find someone to spend my life with, and I didn’t. Life is way too short…..Go find yourself someone as incredible as you, because that’s what you deserve.”

But do Port and Weisman respect their sex-obsessed Jewish character, Trevor? In an episode in which the ghost of a robber baron owner of the mansion is released from a vault (1-20-22), this newest spectre threatens to disrupt all life and death at the residence with his “ghost power” of releasing destructive and illicit sexual passions when he walks through a “living.” Declaring his nasty intentions to his erstwhile wife, house ghost Hetty (Rebecca Wisocky), he obliterates himself into hell. When the others wonder whether Hetty has the power to consign ghosts to hell, Hetty tests it on Trevor, on whom it does not work. Later she apologizes that she did not think that she really had that power. But the writers did so link Trevor’s continuous raunchy remarks to the robber baron’s mischief.

Trevor is not the only Jew to have been featured on Ghosts so far. We met Todd Pearlman (Rodrigo Fernandez-Stoll), who claims to be a historian writing about Alberta Haynes (Danielle Pinnock), the ghost of a 1920s jazz singer who claims that she was murdered at the house, though her cause of death had been deemed a heart attack. The episode (12-2-21), written by Lauren Bridges, painted a moving picture of Alberta, born in Tulsa to Jamaican parents, who by grit and talent made it to clubs and recording studios in Harlem. It gives a sense of the racism that blocked Alberta’s career and robbed her father of opportunities to be recognized as a gifted chef. Alberta has hoped that attention to her life and death would bring pride to her father.

But it turns out that this thirty-five-year-old “bearded history fellow” is a “creepy nut,” a posthumous stalker, as it were, who carries around Alberta’s toenail, which he acquired online, with hopes that he might day clone another Alberta from it, and is always willing to show the tattoo of Alberta’s image that is literally etched into his back. The Alberta Haynes Museum that he claims to curate is located in his mother’s garage in Altoona.

Sam had invited Todd to stay in Trevor’s room while Todd is exploring an old trunk left behind by Alberta. Trevor resents the company, and had asked, upon first seeing Todd, “Who’s the nerd?” He feels no affinity with a visiting Jew (not even for a fellow “T” first-namer), and no sense of Abrahamic hospitality. Also, when the annoying Todd takes sick, Sam and Jay and the ghosts are petrified that he will die on the property and remain there eternally. After calling an ambulance for him, they try to move his body off the property without thought to whether this would worsen his condition. But Todd not only survives but by his sheer oddness causes Alberta to “blow up” on the media. To him, the series offers its only tribute to a Jewish character, at least so far. Alberta says: “O Todd, I love you, you freaky bastard. You did it!”

Will the depiction of Jews in this series get any better? Will it get any worse?

Elliot Gertel
Elliot B. Gertel is the Rabbi Emeritus of Congregation Rodfei Zedek in Chicago. He has been film and television reviewer of the “National Jewish Post and Opinion” since 1979. His books include What Jews Know About Salvation and Over the Top Judaism: Precedents and Trends in the Depiction of Jewish Beliefs and Observances in Film and Television.
Categories: Television 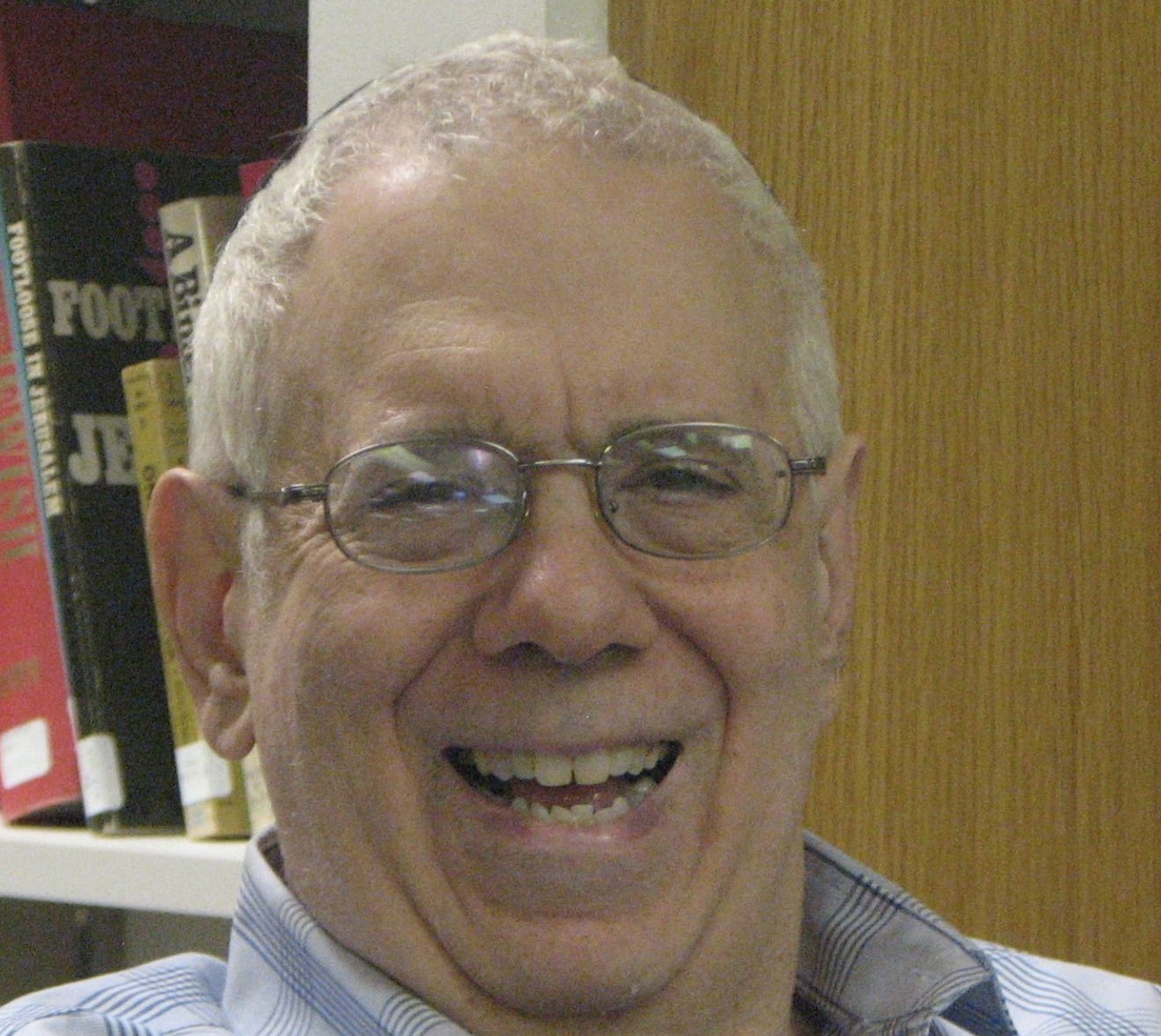 Elliot Gertel
Elliot B. Gertel is the Rabbi Emeritus of Congregation Rodfei Zedek in Chicago. He has been film and television reviewer of the “National Jewish Post and Opinion” since 1979. His books include What Jews Know About Salvation and Over the Top Judaism: Precedents and Trends in the Depiction of Jewish Beliefs and Observances in Film and Television.