David Drimer explores the Jewishness of the famous Beatles movie.

One Sunday night in 1964, the Beatles appeared on the Ed Sullivan Show and the world somehow changed. Almost 60 days after the Kennedy assassination, it broke America out of its national malaise. In the midst of the “British Invasion” – a slew of bands like the Rolling Stones and the Dave Clark Five knocked American groups down the charts for months to come — a feature film starring the Fab Four was inevitable.

The Beatles A Hard Day’s Night was a financial and critical success on its debut later that year, nominated for two Academy Awards, including Best Original Screenplay. Forty years after its release, Time magazine rated it one of the 100 all-time greatest films. In 1988, the British Film Institute ranked it the 88th best British film of the 20th Century. Fifty-two years after the band called it quits, nine hours of documentary footage on the Abbey Road sessions is captivating TV audiences.

In retrospect, we can finally appreciate how culturally “Jewy” A Hard Day’s Night actually is.

In the ’60s, we thought it was directed by a Brit, Dick Lester. Few knew he was actually the Jewish, Philadelphia-born Richard Lester Leibman. For proponents of the auteur theory of film, in which the director is viewed as the major creative force in a motion picture, that fact alone might suffice to prove our point.

How did a largely unheralded Jewish-American variety show director reinvent himself and land the Swinging 60’s plummiest comedy directing gig Britain had to offer? A show Lester produced caught the eye of comedy legend Peter Sellers, another crypto-Jew, who enlisted Lester’s help in translating his radio opus The Goon Show to television as The Idiot Weekly (1956). Lester later received unexpected acclaim for The Running Jumping & Standing Still Film (1959), a short he made with Sellers in virtually one day, using a handheld camera and their friends as actors.

A surprise critical success, it was nominated for an Academy Award. Running Jumping & Standing Still was a favorite of the Beatles, particularly Lennon. The band wasted little time choosing Lester from a long list of possible directors.

According to Peter Stein, the Peabody and Emmy Award-winning director and film producer, “Starting with subversive tricksters like the Marx Brothers, wise-cracking their way into the halls of power, we find that much of Jewish humor in the movies is rooted in their status as outsiders in larger society—allowing Jewish performers to tap a rich vein of underdog comedy that has proven universally appealing.”

Lennon especially loved Groucho, Chico, and Harpo’s perennial underdog, socially inappropriate, fast-talking scoundrels. He once told Mike Nesmith of the Monkees, whose popular American sitcom was an unabashed knockoff of the Beatles film personae,  “I think you’re the greatest comic talent since the Marx Brothers. I never miss any of your programs.”

The plot of A Hard Day’s Night (what there is of it) plays up the “outsider” theme prevalent in all anarchic Jewish comedy. Search no farther than Groucho’s satirically self-deprecating Jewish quip, “I refuse to join any club that would have me as a member.” Compare that to a character telling Ringo, “You know I fought a war for you lot.” To which Ringo deadpans, “I bet you wish you lost.”

Writer Alun Owen’s anarchic screenplay, as interpreted by Lester, turns the idea of musical comedy on its head. Until A Hard Day’s Night, rock movies were formulaic, cookie-cutter affairs. Here, the new music was thrilling, especially to teenage audiences. And it’s Ringo who emerges as the comedic star of the film.

Ringo’s story line is the Jewiest of all the bandmates. He’s left caring for a crazy old man; not even his own relative, but Paul’s grandfather. An avowed communist, Paul’s grandfather “puts silly ideas into his (Ringo’s) head with a book,” according to George. Presumably, it’s the Communist Manifesto (penned by yet another Jewish Marx, Karl not Groucho). He makes Ringo feel he’s been alienated by his mates. So, Ringo is cast into the role of the outsiders’ outsider. There are even several jokes about the size of Ringo’s nose. Troublesome old people, Communism, subversive books, and alienation? What could be more Jewish than that?

At the time, the Beatles were managed by the young, Jewish, gay entrepreneur Brian Epstein. Epstein revealed in an interview, “Everything about the Beatles was right for me—attitude to life, the attitude that comes out in their music … and their humor, and their own personal way of behaving—it was all just what I wanted. They represented the direct, unselfconscious, good-natured human relationships which I hadn’t found and had wanted and felt deprived of. My own sense of inferiority evaporated.”

The Beatles’ second feature Help! is less a Jewishly themed “outsider” film, but as directed by Lester again, does nothing to rein in the anti-establishment comedy and bitingly sarcastic, wisecracking humor.

Alas, John and George, who was the most spiritual of them all, are gone. Ringo’s wife, Barbara Bach, is half Jewish. But in the long post-Beatles history of the bandmates, Paul emerged as the most Jew-ish Beatle. He’s had several Jewish girlfriends (see Jane Asher) and wives, including the late, lamented Linda Eastman and the current Mrs. McCartney. He boasts more than a handful of Jewish grandchildren and was once rumored to be studying for a Bar Mitzvah.

It was A Hard Day’s Night for the Beatles. For the Jews, it’s been a hard few thousand years. For both, a spit in the eye to an unwelcoming establishment has made all the difference.

David Drimer
David Drimer, the former associate publisher of the Forward, is the executive director of the Jewish Federation of Ulster County (UCJF.org) and co-founder of the National Holocaust Awareness Initiative (NHAIonline.org).
Categories: FilmMusic 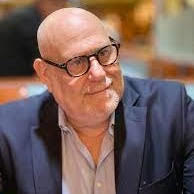 David Drimer
David Drimer, the former associate publisher of the Forward, is the executive director of the Jewish Federation of Ulster County (UCJF.org) and co-founder of the National Holocaust Awareness Initiative (NHAIonline.org).