Clueless at 25: a chance to reflect on Jewish girls in pop culture

In this second piece on the film, Michele Byers reflects on Clueless after 25 years.

Seriously. I’m not sure if it was Alicia Silverstone’s shiny, perfectly straight hair, her BFF Stacey Dash (those hats!), the witty repartee with her dad (‘I couldn’t be happier than if they were based on real grades!’), her closet, or the matching plaid skirt suits I coveted throughout my 20s (more disclosure… I still do), but there was an ineffable quality to Cher that I loved, privilege and all. (A quality rekindled when I ‘met’ Elle Woods in Legally Blonde, although in a very non-Jewish way.)

My Jewish world was definitely outside the rarefied Beverly Hills circles of Cher Horowitz, but the stripped down, secular Jewish universe she lived in was familiar. This is a world where you didn’t need the Catskills, brisket, payot, bagels and a schmear, a smattering of Yiddish, or a bris to signify Jewishness. It was just there.

Once, when we were dating, I accompanied my (non-Jewish) husband to a job interview at a house in a very Jewish part of Montreal. Upon departing, I made some comment about the man who interviewed him being Jewish. ‘How did you know he was Jewish,’ he asked me. Like there should be a sign announcing it (there was: a Mezuzah). I struggled to explain what was so obvious to me. It was… everything. The neighbourhood. The name. The house itself. Hold up! I’m not saying that this house / this guy was representative of all Jews — it was certainly different from me and my house. Still, it was just… familiar. Available to be known to me.

Of course, you didn’t need to get the Jewish angle to like the film. In fact, the only people who really seemed to care about and wanted to debate the coded nature of Jewishness in Clueless were Jews.

But when you are in the know, when decoded Jewishness is natural, and is central to the pleasures you get from watching, it seems shocking that others don’t know—it seems like they are missing some fundamental piece of the text—how, you ask, can they possibly enjoy this?

I once used an episode of Curb to illustrate something in a social theory class I taught about a decade ago. It’s the episode where Larry thinks he’s adopted and discovers that he’s a Gentile (by birth). To my amazement, not a single student in my class knew what a Gentile was (they had never heard the word). They didn’t get why it was funny that Larry assumed his birth parents’ name was Cohen (Jewish) when their name was Cone (Not Jewish). They didn’t understand why it was funny that he didn’t know how to do the sign of the cross, or to eat milk with meat at lunch, or why I was laugh-crying when Larry wore an ascot home on the plane, drank a martini, said he could help in the event of an accident, and offered his kidney to Richard Lewis. They didn’t get why it was funny that, as soon as Larry learned he wasn’t Gentile, he took it all back! They thought the show was funny. They loved it. But they missed all that stuff. It wasn’t their idiom.

A lot of discussions (see Nathan’s write up) of Clueless have focused on the relative lack of explicit Jewishness in the film. But this was the 1990s. Mostly we got subtext… code. This is the time of Seinfeld not Curb… We were years away from The O.C. never mind Broad City, Transparent, and the marvellous Midge Maisel. There has been so much more explicitly coded Jewishness on TV since then; it’s hard to remember what things were like in 1995.

I was thinking about why cinematic and televisual JAPs like Cher and Jessica Stein (Jessica Westfelt in Kissing Jessica Stein (2001)) and Frances ‘Baby’ Houseman (Jennifer Grey in Dirty Dancing (1987)) were adored, while real life JAPs making headlines—Monica Lewinsky and Lizzie Grubman —were reviled.

At the time, I wrote:

Monica and Lizzie, real, flesh and blood young Jewish women are explicitly positioned as immoral. Their lack of morality is framed as an inherent set of attributes they have inherited from their parents, especially their [Jewish] fathers. In Cher and Jessica, JAPpiness is gentled. This isn’t surprising given that most media are constructed to attract audiences. Monica and Lizzie sell papers by having their grotesque subjectivities and pariah bodies stripped bare and paraded in public. Cher and Jessica sell tickets and DVDs by offering gentler, but still instructive, versions of Jewish princesses who look less like Jewesses and who begin to narrate an accountability for their own excesses.

How to think about this 11 years later, after Midge and the Pfefferman sisters and Jenny Schechter, Abbi Jacobsen and Ilana Glazer, Cindy Hayes and Nicky Nichols, Hannah Horvath and Shoshanna Shapiro… Jewish women are everywhere in popular culture.

They are (relatively) diverse (although there is more space for representations of queer, non white, non Euro-Ashkenazi, and non middle / upper-class Jews)… even if a lot of them still wear the imprint of the princess— often in ways, way less gentle than those associated with Cher.

Michele Byers
Michele Byers is professor at Saint Mary’s University in Halifax, Nova Scotia. She just finished reading I Love to Watch and wonders about an alternate universe where her love affair with Buffy the Vampire Slayer turned into a job as a TV critic for The New Yorker rather than a PhD (about Buffy).
Categories: UncategorizedFilm

Ha!! I love this!! Who knew this platform would lead us out of the pandemic and back to our sources (the JAP films of the 90s, I mean, not the TORAH)? Would love to hear more about the point about Rachel Brosnahan — is it a good thing that we can have quintessential Jewish characters played by non-Jews? Problematic? Should we care? FYI, I also just read (LOVED) I Like to Watch and having share of similar fantasies… 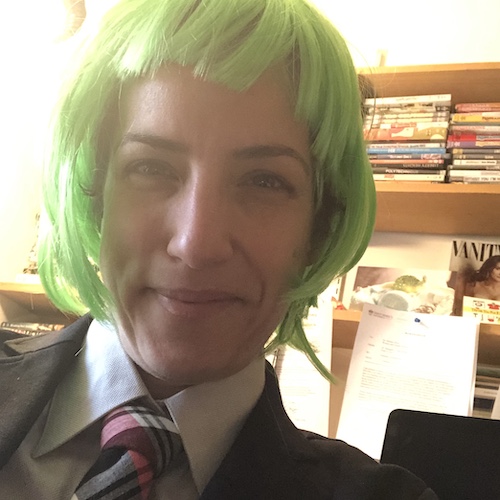 Michele Byers
Michele Byers is professor at Saint Mary’s University in Halifax, Nova Scotia. She just finished reading I Love to Watch and wonders about an alternate universe where her love affair with Buffy the Vampire Slayer turned into a job as a TV critic for The New Yorker rather than a PhD (about Buffy).