Metal and the Holocaust: Feeling the ‘Gut-Punch’ of History

Dominic Wiliams responds to Keith Kahn-Harris about metal and the Holocaust.

In his earlier JewThink article, Keith Kahn-Harris expresses the ambivalent feelings of many Jewish metal fans about metal songs about the Holocaust. Slayer’s ‘Angel of Death’ in particular is something they struggle with, but in the end they ‘cannot turn away from it and repudiate it’. Could it be, Kahn-Harris asks, that the ‘sonic/lyrical gut-punch that “Angel of Death” provides can make the Holocaust “real” to us in a way that other representations might not?’

This is a question I was also struggling with in an article on ‘Angel of Death’ that I published in 2019, in which I argued that it was important to take seriously this song, and the ways that metal fans listened to it, as a form of Holocaust representation, or even of commemoration.

‘Angel of Death’, released as part of their album Reign in Blood in 1986, deals with the sadistic pseudo-scientific experiments of Josef Mengele in Auschwitz, but also placed them in the context of mass death. The lyrics themselves often seem to recount with relish the suffering of Mengele’s victims. Words of condemnation are only occasionally present, and seem to be chosen more for the pleasure of snarling out their sounds (‘rancid Angel of Death’) than for any coherent moral position they might indicate.

The song’s writer, Jeff Hanneman, certainly seems to have had attractions and interest in Nazism that were not beyond suspicion. For example, Hanneman used SS-style logos on his guitars (although not, as is sometimes said, swastikas), including one guitar overwritten with what appear to be the names of Waffen-SS units.

But Hanneman does not entirely define what the song ‘Angel of Death’ is about. Listeners to songs are actively involved in creating its meanings. And so, in an attempt to see what meanings fans found in the music, I examined two sets of videos on YouTube: concert videos, where fans mosh while the song is performed live, and reaction videos, in which people act out the experience of hearing a song, usually for the first time.

In one concert video from last year, a fan videoed the moshpit while Slayer performed ‘Angel of Death’ for the last time in the UK on their farewell world tour.

What we see here is fans mainly playing at, and occasionally actually, being violent, whilst also celebrating being together and even caring for each other: towards the end, the video-er is knocked over, with several hands grabbing him to help him up, and a voice saying ‘I got you bro’. At the same time, they shout out lyrics that explicitly evoke the Shoah: ‘Auschwitz’, ‘400,000 more to die’, ‘Holocaust’. The community that is being created and performed here is one that seems founded on acknowledging violence within self and within history. The understanding of the latter is certainly not developed or articulated. But I think fans here can be seen to be responding to the history of violence that the Holocaust stands for in this performance: through creating a community of mutual support while not indulging in easy disavowals of the attraction of violence.

In reaction videos, fans, or preferably metal neophytes, show themselves to be overcome with horror at ‘Angel of Death’s’ combination of vibratory assault on the senses with evocation of abject suffering.

As an African American, No Life Shaq appears to be read by metalheads (and positions himself) as someone unversed in the metal scene, who ‘lose[s] [his] virginity to Slayer’. To someone reading its lyrics, ‘Angel of Death’ might look like an invitation to indulge in sadism and identify with Mengele. In this video, however, Shaq’s embodied reaction is to figure himself as penetrated by the music and lyrical content, and even contaminated by its evil. Death is registered as something that is targeted at him, as well as all the song’s other listeners; he appears to talk of ‘400,000 of us’. As with the video from the mosh pit, there is no worked-out politics being articulated here. Nazi genocidal beliefs and their links to other workings of racism are not examined. Shaq reacts to the words ‘to benefit the Aryan race’ (which might speak to American – or Western – history as much as to the Shoah specifically), but no differently (at least as I read it) from other words that horrify him such as ‘the way that I want you to die’ and ‘Angel of Death’. Nonetheless, his reactions do involve an attempt to cognize, and to feel, mass death. His repeated disbelief and bewilderment about the figure of ‘400,000 more to die’ is, at the most basic level, a reaction to genocide. His experience of the music leads him not to turn it into a spectacle of atrocity, but rather something that might be inflicted on him, something he can share with his community of listeners.

In examining these cases, I felt that a set of questions were coming out about representing the Holocaust, that metal helped to raise. What is the ‘correct’ way to respond to the Holocaust? Is it to get all the facts right and to understand its causes and development without giving into emotions? Or is it to deal with the kinds of feelings that it provokes in us? Metal is often discussed in terms of the intense feelings it evokes, in some sense for the pleasure of experiencing them, but the feelings are often negative in themselves: anger, hatred, fear, pain. Metal, then, is an interesting case study – and in fact, more than just a case study: a theory in practice – of what forms exploring those feelings might take, and what they might mean.

In the article that I published as part of the special issue Metal, Jews and the Holocaust that Keith Kahn-Harris and I co-edited, I tried to take this thinking further by considering how extreme metal bands had represented one of the Holocaust’s most troubling groups of victims: the Auschwitz Sonderkommando. The prisoners who were forced to man the gas chambers and ovens of Birkenau, marked for death in their turn, have inspired a small but intriguing number of metal songs – and metal is one of the few music genres to have made any attempt to write about them. Here I tried to suggest that metal’s approach to representing difficult topics was not simply vicarious sadism, but had aspects that were worthy of careful consideration. Precisely because thinking and reflecting deeply is often not important to metal bands, other aspects that might have value come more to the fore. Wallowing in intense feeling may not simply be about refusing to engage in any meaningful way with the past. It might be another way of engaging with it, not through articulated thought or reflection, but working through the past in an embodied way.

Death metal notoriously, for example, uses vocal styles that render much of the lyrics unintelligible:

Here, little can be made out beyond the repeated shouting out of ‘Sonderkommando’. What that means is that what at one level sounds like an attempt to turn the Holocaust into a horror movie soundtrack, instead, by acting that impulse out to excess, ends up as something quite different. Rather than making the suffering of the Sonderkommando immediately available to listeners (and this provide them with the satisfaction of knowing – even if that knowledge is of the worst), death metal’s musical practices mediate it, hold it at a certain distance. Might they even be said to grant the Sonderkommando some privacy?

The lyrics to the Obscene’s song seem now only to be known to the tiny group people who bought their CD: they are nowhere on the internet and the band themselves seem to have lost them. But even when lyrics are more widely available, metal’s approach means that songs rarely describe their subjects in readily understandable terms. Like rock and pop songs, they evoke rather than describe, and are often built out of phrases whose connections are not spelt out. Added to that is metal’s attraction to more esoteric, often polysyllabic, vocabulary over syntactic or morphological exactitude, and what seems to be greater tolerance for international bands not meeting ‘native speaker’ standards of English.

At the song’s opening, vocalist Renaud Espeche belts out these lines (written from the point of view of the Sonderkommando):

As the gas is killing them

We have to be the dirty witnesses to their crimes…

As someone with a background in literary studies, I feel tempted to make something of the ambiguities and imprecisions of this language, but really the meaning is not meant to be puzzled over like that – the lyricist seems more to have picked up whatever linguistic tool he has to hand. Even so, it is hard not to see the phrase ‘dirty witnesses’ as evocative: the Sonderkommando being or feeling contaminated simply by being present at this scene of mass murder, with it unclear how much we as listeners should share that judgement.

The far more linguistically precise writer Primo Levi found that his ability to write and imagine faltered when he tried to discuss the Sonderkommando, saying that they prompted ‘convulsed [or convulsive] questions’ (domande convulse), questions that seem to be felt in the body as much as intellectually. He registered a ‘gut-punch’ as he tried to meditate on this group. In metal practices where meditation is less valued, that bodily feeling is nonetheless explored in ways that could be said to speak to Levi’s own attempt to articulate it.

Now this of course may not be metal bands’ own understanding of what they are doing. But in the encounter between my attempt as a Holocaust scholar to read them and what their practices are something interesting has emerged. And that is not just a question of what I have managed to extract out of this practice, or how I have managed to frame it. Rather, their practices have challenged me to think about what Holocaust representation could and should be. That is not to say the Holocaust memory practices can simply take their lead from how metal has approached it. But I think that we need to take metal seriously and pay it some respect in its attempts to engage in a meaningful way with the darkest parts of the past.

Dominic Williams
Dominic Williams is Senior Lecturer in Holocaust and Genocide Studies at Northumbria University, UK.  With Keith Kahn-Harris, he has co-edited Metal, Jews and the Holocaust, a special issue of the journal Metal Music Studies (September 2020).
Categories: MusicHolocaust 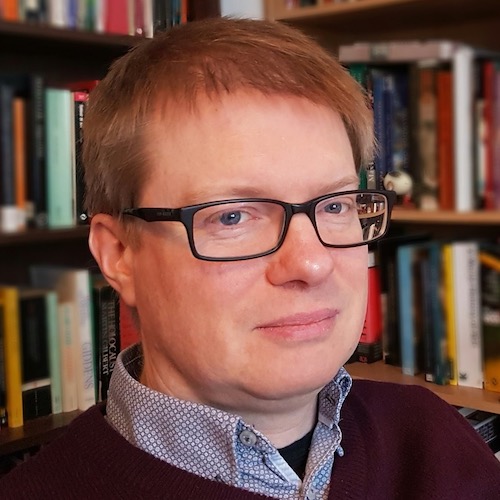 Dominic Williams
Dominic Williams is Senior Lecturer in Holocaust and Genocide Studies at Northumbria University, UK.  With Keith Kahn-Harris, he has co-edited Metal, Jews and the Holocaust, a special issue of the journal Metal Music Studies (September 2020).