Myra Woolfson reminisces about her late father and the interesting set of items he brought home from the war.

My late father, Captain Vernon Smith, was a doctor in the Royal Army Medical Corps from November 1941 until March 1946. He joined up towards the end of his first hospital job following graduation. When he died, in 2008, he left various mementos of his army years. His khaki jacket; the travelling trunk with his name painted onto it, V. Smith, R.A.M.C. 208907; a diary he kept for a few weeks before and after Normandy; several photographs; his medals; a certificate of outstanding service signed by General Montgomery and some letters from ex-army comrades sent in the two years or so after the war. But the most unusual thing was a set of surgical instruments.

This Englishman from Leeds was assigned to various postings in the 51st Highland Division. There was a great deal of moving around and preparation for active service until in April 1942 he was transferred to the 126th Field Regiment (artillery), where he remained for the duration of the war as Regimental Medical Officer.

He took part in campaigns in North Africa, Sicily and then on D-Day + 3, his regiment landed in Normandy and worked its way through France and onwards through northern Europe.

He spent the last few months of his service in Germany, where he was billeted for a time with the wife (or, almost certainly, widow) of a German surgeon, who had been sent to the Eastern front. She must have known that her husband wasn’t going to return as she gave my father a box of surgical instruments that had belonged to him. One metal container is dated 1890, so they may have been collectors’ items rather than in recent use.

Did she know my father was Jewish? I will never know the answer to this. He carefully brought them back to the UK and kept them for the rest of his life. Unfortunately, I don’t have any more information about the instruments or the widow. I don’t know why she gave my father this gift.  I have wondered if she might have been an anti-fascist, in her views if not in her actions, and was pleased to have a doctor billeted with her and perhaps saw him as someone who would look after her husband’s professional heritage. I wish I had asked my father more about this.

In July of this year, I looked again at the box and decided to try to find a home for the instruments. I contacted the Science Museum. The Curator of Medicine expressed initial interest, but then said that they couldn’t take them and referred me to the National Army Museum (NAM). In the past few weeks, I have been in contact with one of their curators.

I had mentioned that I also had other memorabilia of my father’s army service and she expressed interest in those, asking if I would be willing to donate them too. It felt a wrench – could I bear to part with them permanently? I decided if the museum accepted the items (and it was not yet a given as the final decision rested with the Collections Development Group) that my father would have been pleased his experience was valued in this way.

In the last few weeks, I have spent many hours with this material: taking photographs of everything as requested; responding to queries from the curator; typing up the diary entries, or what I could read of them (doctor’s handwriting!) I became immersed in this period of my father’s life and learned more about him as well as about his wartime service. He had a deep comradeship with some of his fellow soldiers, which became apparent from their letters to him after the war. This was something of a revelation to me as I knew him as someone who was very involved with his family and the Jewish world but who didn’t seem to have much involvement outside that world other than in his professional life. There were no more letters after 1948. Probably for all of them busy lives, families and the distance between them made it hard to stay in touch.

Yet perhaps the clues were there. Something else I found after his death was a huge batch of cards from his patients, written on his retirement after well over 40 years of practice as a GP in the east end of Glasgow, many expressing warm thanks and sometimes referring to him as someone they saw as a friend. This too was news to me.

When I first read the diary, I was a little disappointed. It begins on 2nd June 1944 and ends on 23rd August the same year. Much of it concerns living conditions – the weather, the sleeping arrangements, setting up the regimental aid post and constant moving to new positions. But there are also entries about the build-up of tension before sailing to Normandy, the amazing sight of hundreds of ships anchored when they arrived, the stress and discomfort of the bombing attacks. I realised that at first reading I had missed some of the meaning behind the entries, written as they were in a low-key and stoical way. This no doubt the result of an army culture of stiff upper lip superimposed on my father’s natural stoicism and under-statement. He described elsewhere, with a little more feeling, being attacked twice by ‘friendly fire’. On the first occasion, his unit was bombed by the Canadian Air Force near occupied Caen. The second incident happened as the regiment was approaching Germany. He was evacuating a wounded British soldier in an ambulance when a British plane machine-gunned them, set the ambulance on fire and ‘straddled’ his truck with bullets. Fortunately, no-one was hurt.

At the end of November, the curator contacted me to say that the museum would like to accept the items I had offered. All of them, except the trunk. It seems they have plenty of these. I’m fine with that because I keep it in my living room. It provides storage for old LPs and a useful stand for the telephone and broadband receiver. The NAM seems genuinely pleased to receive what they refer to as the collection. They have no other items from the 126th Field Regiment and only one other of a similar size relating to the experience of a Jewish soldier in the Second World War.

My father ended up staying in Scotland after the war, having married into a Glasgow family. A few years before he died, he wrote a short memoir of his war experience for a booklet produced by the Scottish Jewish Archives Centre. In it, he highlighted meetings with and invitations from Jewish families and individuals he met during his travels and on periods of home leave and rest and training. I sent this to the curator but found myself thinking it might seem somewhat parochial. Then I realised that this may be part of the appeal to her and to the museum of my father’s army story. This was the experience of an ordinary person who was part of a great movement to liberate Europe from Fascism and yet was still also part of his community.

Myra Woolfson
Myra Woolfson grew up in Glasgow and has lived in Nottingham for many years.
Categories: HistoryUncategorized 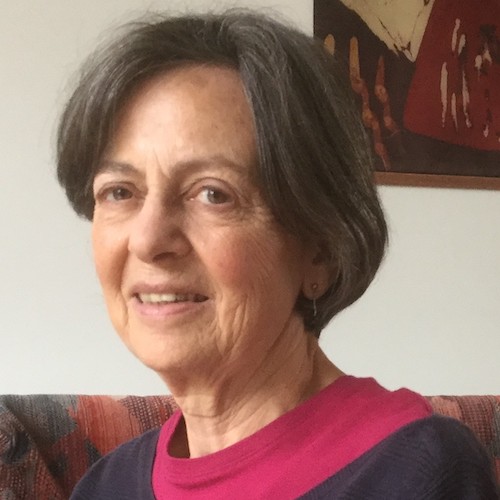 Myra Woolfson
Myra Woolfson grew up in Glasgow and has lived in Nottingham for many years.