Martin H. Di Maggio argues that the time to act is now.

Shortly after I was born, nurses noticed that I was “a bit different from other boys” and took me to have chromosome tests (without informing my mother) to verify my sex. It wasn’t enough that I “looked like a boy” or that I had all the “right parts” because I wasn’t “wired up properly.” My mother was told not to worry because by the time I had all the necessary surgery (one they said) I would grow up to be able to have sex like any normal man. My mother was rightly shocked at this statement; “he’s literally a newborn baby and you’re talking about his sex life?!” She was right, I was an innocent little baby, with no concept of my gender or sex, certainly no desire to have “normal sex.”

I was, in fact, not a little boy, I was intersex. Intersex is when one’s sex characteristics (anatomy, chromosomes, hormones, and genitalia) don’t meet the accepted norms of what is considered male or female. In some (common) cases those characteristics are so close to the accepted standards in appearance but aren’t quite right – according to the medical profession – that doctors pressure parents (and in many cases parents pressure doctors) to perform surgeries. My mother and father were told that I was a boy but I was incomplete and just needed perfecting. My parents believed in God and wanted to leave me how I was made, they believed I already was perfect. But this belief was entered into my medical notes as my parents’ “extremist religiosity” which they said was a barrier to my proper healthcare.

They were further pressured, and by the age of three, the physical transition of my sex began. Medical professionals believe that there is no physical urgency to this surgery, but intersex children are a “psychosexual emergency” and should we be left to nature we would grow up to be misfits. I went on to experience a further six surgeries up until my final one at age 17, which was performed by the same surgeon who was struck off the medical register in 2010 for sexual misconduct against his underage minors. I was one of them. He wasn’t convicted in criminal court as a colleague of his gave evidence that masturbating his patients was justified as we had disorders of sex development and needed to be shown how to ejaculate. That means we don’t have the legal freedom from sexual assault, a right which none of us has in the EU except Malta, and we do not have the right to withdraw consent from surgery either. The “emergency” means doctors can go ahead and operate on our genitals without asking our parents in some cases, and certainly without asking us.

Intersex in the Talmud

So what does Judaism have to say about us? Well, there are no less than seven sexes listed in Talmud. Other than zachar (male) and nekivah (female) there are:

1. Androginus: having characteristics of both males and females, in some ways similar to both and some ways to neither (Mishnah Bikkurim 4:1).

3. Aylonit: no breasts, low libido, no mons pubis, and a deep voice that is indistinguishable from that of a man (Mishneh Torah, Hil. Ishus, 2:6).

I would fit into one of those categories not described as zachar (male), all of which have different halachot associated with them, marriage laws and sex ethics are different for me according to orthodox Halachah than they are for an endosex male, which is someone who is not intersex.

We might assume that Progressive Judaism in the UK is not interested in the importance of the Talmud for the lives of intersex Jews, right? Well, while that should be the case, it is not always put into practice.

Last year, I attended the funeral of a well-known intersex activist who would have been known in Talmud times as a Tumtum. She transitioned fully to a female gender presentation later in life, after having talked openly about the pain of growing up in the United Synagogue movement. Whilst she was open in her activism about having been born intersex, she was in every way a woman who socially identified as trans. She certainly did not speak about her genitals. At the funeral, a progressive rabbi said the Kaddish for her as a woman but saw no problem with allowing the orthodox brother to eulogise his sister as a man, using her male name, and to the shock of some present, decided to tell mourners about his “brother’s” genitals.

I spoke out on Zoom in the chat and was told that it was inappropriate to do so. Other intersex and trans mourners and I left the funeral feeling disgusted. I made a complaint to the Assembly of Reform Rabbis and Cantors who set up a meeting with the synagogue chair and the rabbi, who were hostile and defensive. The rabbi told me that their “only regret was convincing the family to allow the deceased’s friend into the funeral.” She saw nothing wrong with the brother’s actions and even gave my name to the family members who then began contacting me on Facebook and attacking me, referring to their right to talk about their father. Reform Judaism told me there was nothing they could really do except provide some training.

This is a problem. Neither Reform Judaism nor Liberal Judaism has any say over the conduct of individual synagogues and there was no procedure with which they could hold that synagogue and rabbi accountable. After attending a council meeting where I challenged a trans man being described as a woman, I began to experience hostility and witness transphobia. This was one of the UK’s most inclusive synagogues, where I continued to have a series of hostile council meetings where I was told by longstanding members that if I did not like their brand of feminism I should leave.

I had other longstanding members reach out to me, including people who had essentially fled the group for the same reason, and I began to question why trans exclusionary radical feminism was allowed positions of power in the community, and why there was no strong policy against it. I called for training on trans and intersex issues and had to fight for the one session when I was permitted to lead about Intersex rights, during a lunch and learn. I was attacked by many of those voices, and it took an LJY-Netzer young person to chip in and call people out, she described the atmosphere as bullying and disrespectful attacks on my life experience and expertise. The community was essentially founded by a group of people, who rightfully fought for the inclusion of women and patrilineal Jews, and must be credited for that, but their feminism has to a certain extent remained stuck in time. I was supported throughout by a newly ordained LGBT rabbi who has since left the community, and I myself left. There was nowhere else to go and I have not yet achieved a point where I have got a commitment from Reform or Liberal Judaism to stamp out transphobia.

Why did I begin this article with an account of some of my own story about being intersex and then finish with a call to stamp out transphobia? Because neither sex nor gender is clear cut for everybody, and while people like me or the person whose funeral was so dismally violating of her rights are a small minority, our lives show that even in death we are often misgendered and disrespected by even the most progressive LGBT people in Judaism. I am tired of waiting for the conversations, waiting for a moment to speak for 50 minutes only to be interrupted and cisgendersplained. I am tired of attending lovely Limmud talks where we pat ourselves on the back for knowing what Talmud says about gender, and for being so inclusive.

What kind of inclusion results in the type of funeral I attended or TERFs being able to dictate who belongs in a synagogue, even if the vast majority of its members are LGB?!

The time to act is now before more of us lose our human rights from cradle to grave.

Martin Di Maggio
Martin is a community development worker who provides training for public sector organisations on various aspects of LGBTI+ rights, including intersex and neurodiversity, as well as being an advocate for religious literacy among LGBTI+ communities. He is a member of the Society for Humanistic Judaism and grew up in Hereford and Worcester to a mixed British-Italian-Albanian family. He is also a sociolinguist with a Masters in Language Documentation for endangered languages and has a BA in Anthropology and Community Development. He has previously worked with the CPS to improve the police force’s response to hate crime reports from marginalised communities.
Categories: ReligionJudaismCommunity

wow! So important to learn. I too have experienced transphobia in LJ, and I too left as a result. 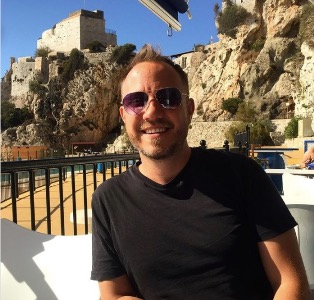 Martin Di Maggio
Martin is a community development worker who provides training for public sector organisations on various aspects of LGBTI+ rights, including intersex and neurodiversity, as well as being an advocate for religious literacy among LGBTI+ communities. He is a member of the Society for Humanistic Judaism and grew up in Hereford and Worcester to a mixed British-Italian-Albanian family. He is also a sociolinguist with a Masters in Language Documentation for endangered languages and has a BA in Anthropology and Community Development. He has previously worked with the CPS to improve the police force’s response to hate crime reports from marginalised communities.